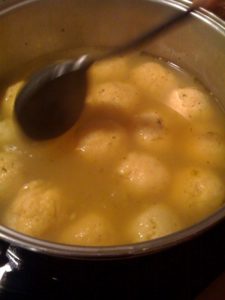 To a modern American Jew, a matzoh ball can be a sacred thing. Jewish chicken soup is a known curative. Countless children—and science researchers at the University of Nebraska in 1993—have proven that there is a particular alchemy when the chicken parts and celery and carrots and onion and water (and dill; there should be dill) come together in the pot. The bubbling and roiling that produces the broth can clear both the congestion from a cold and blockages of the soul. The broth is the base. The matzoh ball is the treat. You don’t need it to cure anything but really, what’s the point of the soup without it?

Mothers and bubbes work hard to claim a place of pride with regard to their matzoh balls, and everyone has a different secret for achieving what she thinks is the best size, weight, consistency. Some say cook the eggs a bit first, some say seltzer is key to the fluffiness, some even use a little vodka. No matter what, you know they should look like beige snowballs in the soup, perhaps with little bits of schmaltz clinging here and there. Push the side of your spoon in and ease off a little bit of starchy heaven.

One recent Passover, my brother David and brother-in-law Mike were responsible for the meal. Talented chefs both, they set about creating decadent chopped liver, gorgeous brisket in a thick, oniony gravy, savory tzimmes with every root vegetable they could find. But matzoh balls made from whole wheat matzoh meal? Just… why?

They were golf ball-sized, small enough to eat two without getting too full but they didn’t taste like matzoh balls. They tasted like they were working conspicuously to be “healthy,” completely unnecessary given the super-powers of Jewish chicken soup. They were brown and dense and starchy and it took some determination to cut through them. But when I heard the familiar click of spoon to bowl, I remembered my Buba.

It almost didn’t matter what holiday it was: Rosh Hashanah, Passover, Hanukkah, whatever. Regardless of what the rabbis or tradition prescribed, our meal was identical. And whether celebrating an exodus from slavery or a festival of lights, Buba’s food was the same: badly cooked.

As we sat in the living room before each holiday meal, her famous chopped liver boded well. When I was young I’d look at the bowl with fear and revulsion, but soon enough I was a devotee of that high-cholesterol dream schmear. I tried not to focus on the fact that I was eating organs and more on how good it tasted spread on a cracker. And that it was something that my Buba could cook, unlike what was to come.

The table was always beautifully laid. Buba used the good china and the good silver and lit lovely candlesticks (albeit without a brocha, a prayer) each time we came together for the holy days. We’d begin the meal innocuously enough—with cantaloupe chunks and red grapes, halved for some reason. Fancier that way, I supposed. I’d pick at the fruit, but I was always looking forward to what I considered the main event: matzoh ball soup. How was I to know that a matzoh ball was not to have the weight of a baseball or take as much effort to cut as a hunk of Swiss cheese? My Buba and Zayda’s was the only Jewish table I knew, and as far as I was concerned, this was what a matzoh ball should be. It wasn’t until I was an adult that I had my first fluffy snowball sitting in a bowl of soup. Buba’s were craggy as the surface of the moon with shriveled, uneven skins and those hunks of starch were what I looked forward to. They sank in chicken soup that she mixed straight from the Lipton’s packet. As we began to eat, I could hear the persistent tink on the bottoms of our bowls as we pressed hard enough to chip away bite-sized pieces. Sometimes my mother, ever decorous, even used a knife to prevent splashing.

Buba followed the soup with chicken, though broiled or baked I was never sure. There was no skin, a strangely healthy choice that left each piece a desiccated brown thing. You could describe the chicken as overcooked, but then what would you say about the brisket? There were, at least, vegetables. Carrots, generally, and string beans that from time to time had a hopeful bite to them. Dessert was a relief, bringing the other two things that my Buba could cook besides chopped liver. First, apple strudel, with a great balance of fruit, raisins, and not too much sugar, each piece in its own delicate pink or blue baking cup. And then “Annette’s Cake”—a pound cake with a drizzle of Hershey’s chocolate syrup poured through the center right before it went in the oven.

My mother, Annette, was the cake’s biggest fan. Dad had married my mother over his parents’ objection and without their knowledge. They knew he’d been dating a Black woman, one who was not a Jew, and they’d written her a letter to make their objection clear. But my parents went to City Hall and married. My father called his parents afterward and asked if they would like to come and meet his wife. Buba made her first visit to my parents’ home alone, nervous but willing. She was a small woman, not quite five feet tall with a halo of hair she bleached blonde to hide the gray. She stepped tentatively across their threshold and peered, almost frightened, around their home through her gold-framed glasses. She was impressed and pronounced my mom a gut balabosta, meaning she kept a good house. They shared a stiff, almost pleasant lunch then bid each other an awkward goodbye, unclear what to do with their hands or smiles. They nodded a lot. A few hours after she left my father got a call from my Zayda, inviting the newlyweds over the next weekend. Zayda was struck by mom at that first meeting. When they left, he gave her a warm hug and called her his daughter. Buba was already in the car, but hopped out to follow her husband’s embrace with her own. The wound began to mend. From then on, the cake was always made for Annette.

None of the holiday meals at Buba’s table were memorable for the food, though I remember the tastes well. I remember her puttering around the kitchen, holding the platters high as she brought them to the table. I remember the first year I was old enough to help and learned the soup was Lipton’s. I remember the small folk painting of Elijah visiting a family on Passover that hung over the table. But I was raised on remembering, clear that I must never forget. Everyone who made up what would have been my Jewish family was lost in the War. No one taught my Buba to cook, or whether seltzer really is a good idea when crafting what she always called, in her native Yiddish, kneidelach. I imagine she may have helped with the preparation of more than a few shabbes meals when she was a girl, but by 19 she was alone in a prison camp in the Siberian tundra. How does a girl learn to cook a savory brisket there? When your mother, your sisters, your bubas, your aunts, your cousins, even your mother-in-law have perished, burning in god knows which camp, who is to teach you the proportion of matzoh meal to water, the right amount of schmaltz, how the soup must boil to make the each ball puff and float? But she fed the family she had gathered around her table. She would beam and shake her head, her eyes filling with tears. “Mine family. Mine gold,” she’d say. My Zayda would smile and nod, my father grumble “Ma, please.”

We ate well and full. We praised the meal, grateful for each bite.

Now, she is gone, as is my Zayda. My father too, dead eleven years. His sister, my aunt, and her two children are my only remaining Jewish family. She always did everything my father did, so she married outside the culture too. My cousins are as Muslim as they are Jewish and seem to always need tutoring on the meaning of each holiday. My Catholic sister-in-law married a Jew, which expands the pool a little, so now the Passover and Rosh Hashana tables are bigger than they’ve been in a long time. But they should have always been bigger. My grandparents had many siblings, gangs of close cousins who would have had children and grandchildren my age, older, younger. There would have been brises, weddings—even funerals, I would take. I’d take any number of funerals to have back even a few members of the family I’ve never known. Instead there are matzoh balls, so I’ll take them. Whatever they’re made of, however they come.