“Why does the man go to the bathroom inside a woman when there are toilets everywhere?” I asked my mom in elementary school about the love that was made (sex). She didn’t explain, ever, and I kept my virginity so I wouldn’t be a urinal. 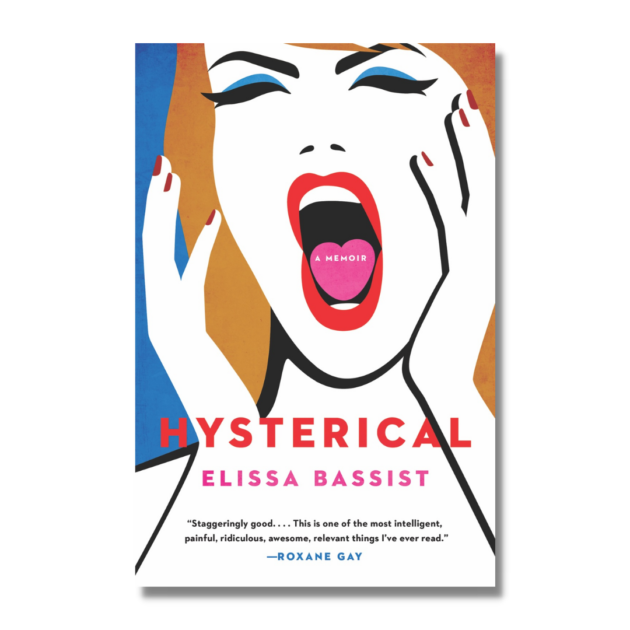 Our second sex talk was months before I left for college, during dinner. “I am going to have sex in college,” I told my mom and stepdad, after pausing the TV.

One might say I got my uncontrolled extreme emotions from her. Also, my life was affected by her loss— her mother died when she was seventeen; she had two divorces and three miscarriages; in her womb I went from triplet to twin to me (“my one, my only,” she says). If ever I did something she her- self wouldn’t do, she’d ask, “Do you not love me?” Or say, “I don’t know what I did besides love you so so much and give you everything you’ve ever wanted.” She took my existence person- ally, and in her Southern, Jewish mindset, sex came after marriage, never before, and although spelled differently, “sex” and “love” were the same.

(My Southern, Jewish dad and I had zero sex talks and almost as many real talks.)

I didn’t lose the deformity known as virginity until I was (DO NOT LAUGH) twenty-two years old. I was a virgin other virgins mocked, a girl who’d nicknamed her vagina Sleepy Hollow.

Playing my first game of Never Have I Ever in college, I volunteered first since I had never ever done more than most.

“Never have I ever tried mustard,” I said.

“Never have I ever given road head,” the freshman who went next said, letting me and the room know that I had grown up wrong. But no girl I’d met got near herself or felt anything other than disgrace for her body and all it could or couldn’t do. We weren’t raised by wolves; we, as a society, pretty much pretend the clitoris/vulva/vagina isn’t there.

“The clitoris has been contested, debated, ignored, demonized, and mythologized in medical discourse since antiquity,” and it has been maligned “as a pathology” and “misrepresented, suppressed, and even completely omitted from anatomical and gynecological literature until very recently,” writes Dr. Elinor Cleghorn

in Unwell Women. “The tale of the clitoris is a parable of culture,” according to Professor Helen O’Connell, Australia’s first urologist who is a woman. In 2019, Twitter banned ads using the word “vagina” to promote the book The Vagina Bible: The Vulva and the Vagina: Separating the Myth from the Medicine by Dr. Jen Gunter, relegating and reinforcing “vagina” as an unutterable word instead of an anatomical term, while Delta Air Lines showed edited versions of the film Booksmart to exclude the word “vagina.” Though Delta put “vagina” back after complaints, a lot of people remain committed to ignorance about women and their bodies. In response to the survey statement “Most women get their periods at the first of the month,” 40 percent of Republican male voters said it’s “true” or they were not sure. Even the Oxford English Dictionary—“the principal historical dictionary of the English language,” from which most other dictionaries derive— defines the clitoris as “a small, sensitive, erectile part of the female genitals at the anterior end of the vulva.” Wrong. So wrong. The clitoris is an organ, part external and part internal, and the only organ whose function is pleasure. And it isn’t “small”— internally it ranges from seven to twelve centimeters long and has twice as many nerve endings as the penis. [APPLAUSE BREAK.]

But like society, I pretended and would continue to pretend until someone else discovered my clitoris for me and did what he wanted to do with it that I would pretend to like. Because that’s love. Because “What woman understands by love is clear enough: it is not only devotion, it is a total gift of body and soul, without reservation, without regard for anything whatever,” the male philosopher Friedrich Nietzsche wrote in The Gay Science, which media baked into the rest of us, along with male philosopher Søren Kierkegaard’s observation that “when a girl’s love is not self-sacrificing, then she is not a woman but a man.”

Total, unreserved, oblivious, charitable gift of body and soul and genitals is what real relationships, real fireworks require, and real girls sacrifice themselves for love, or else they are men.

Excerpted from Hysterical: A Memoir by Elissa Bassist. Copyright © 2022. Available from Hachette Books, an imprint of Hachette Book Group, Inc.