I PARK MY CAR as close to Dr. Rex’s door as possible, aware that if any congregants were to see me going in or coming out it might disturb them.

Why, they might ask themselves, does Rabbi Amy, who speaks to us with such certainty, need a therapist?

Dr. Rex sits on the sofa, leaving the lone chair for me. We nod at one another.

Often during the fifty-five sessions we’ve already had, I’ve wanted to ask why and when therapists stopped encouraging patients to recline. Sometimes I’ve even considered prostrating myself on the rug that lies between us, then waiting to see how he reacts.

‘So?’ he says when the silence goes on for too long and becomes something that must be tended to.

‘So, there’s been a lot going on for me,’ I say, leaning back in the chair as far as its stiff back allows.

I consider this. Maybe I do, maybe I don’t. Only time will tell.

LET ME TELL YOU a story.

A long time ago a boy called Abram lived in the land of Canaan.

And although his dad had an idol shop and their belief system was entirely built on idolatry, Abram didn’t believe. It wasn’t that he didn’t want to, he just couldn’t.

One day, his dad went out leaving him in charge of the shop and Abram got a hammer and smashed the idols to pieces, all except the biggest one, into whose hands he placed the hammer.

‘Abram, what have you done?’ cried his father when he got home. He must have been thinking—My business! How could my son do this?

But instead of a straight answer, Abram said, ‘It wasn’t me Dad, it was him,’ and nodded to the idol holding the hammer.

‘Duh, exactly,’ said Abram, smiling, ‘so why do you worship him then?’

The first time I hear this story Mrs. Ritterband teaches it at school. I am impressed with how clever Abram is and how he knows himself so well that eventually he leaves home and becomes Abraham the founding father of Judaism.

But then I get older and I have children of my own and I think—what a little shit. 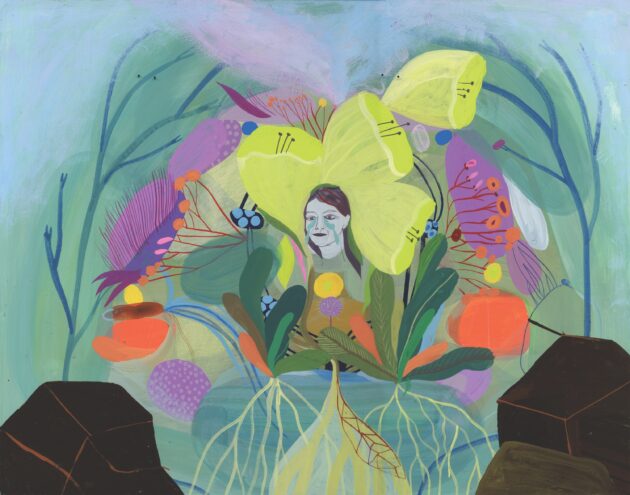 I DECIDE I WANT to be a rabbi when we visit my father’s renegade sister Edie in Chicago. After breakfast on her terrace, she takes us to temple (which is what Americans call synagogue) where the rabbi is a WOMAN. Afterwards, my dad eats schmaltz herring and says, well, of course, it isn’t a proper synagogue, but I see Rabbi Cynthia Schultz wearing a green dress with purple boots underneath her Talit and I know: one day I want to be her.

We line up to say shabbat shalom. I want to say something to impress the rabbi, but I am fourteen, so of course, I don’t.

When I get back to Manchester, I make Mum buy me purple boots and I wear them every week to synagogue until they pinch my toes so badly, that I can’t walk anymore. Not one step.

ALL EVERYONE IS TALKING about in my congregation these days though is Brexit.

Barry Feldman (Brexit) and Lilian Caller (Remain), Cantor Abigail comes to me and says, ‘Rabbi Amy, I think we need to do something to heal the divisions in the community. Do you have a parable you can share maybe?’

HOW DO WE TEACH our children to love?

She always wants to be where she is not.
I try to make her want to stay, but nothing works.
Right from the beginning, she is running away from me. At a thousand miles an hour.

THE NEXT WEEK I climb up to the pulpit, survey my flock and say, ‘Today, I want to talk about Abraham.’

Abigail is in the front row. I see her roll her eyes skywards.

Not that old chestnut, she is thinking.

‘For a long time,’ I say, ‘I have struggled with the story of Abraham—

Look at it one way and it’s a story of bravery—a man who leaves all he knows to establish something new. A man who leaves his identity behind entirely, even changing his name. A man who plants a tree whose shade he knows he will never sit under—in hope.

Look at it another way and it’s a story of a man who turns his back on his family and everything he knows to go and run after some crazy dream he never gets to see realized.

I love you all is what I am saying—

I love you all.

SOMEWHERE BETWEEN BREXIT AND Trump though, I lose my faith.

One minute it’s there so solid and comfortable and reliable and true.

The next it starts to leak away like day into night until eventually, it’s like it was never there at all.

I look in all the usual places—at synagogue, on my morning walk with the dog, on the bench where two old friends share breakfast, in the eyes of my daughter—but it is nowhere.

AFTER THE SERVICE is over, Barry Feldman comes over and says, ‘Nice sermon, Rabbi, very nice. That told them.’

He has just heard what he wants to hear and that is probably all anyone ever does so I smile and say, ‘Oh yes, Barry, yes it did.’ And then that night I go to bed and dream I am making love with Barry Feldman and I like it.

I RETURN TO DR. REX for session fifty-six.

‘How is everything this week?’ he asks.

Since last week a chaise lounge has appeared in place of the chair.

I lie back and relax, it is so comfortable, there is room for two even.

I think about telling the truth—

Everything is disjointed. Where there should be truth and certainty there is just a mass of darkness and
my daughter hates me and does not want to be near me at all and appears to find my very physicality disgusting, which I understand because I do too

and everything feels so ugly and helpless

and if Grab Them by The Pussy wasn’t bad enough, what is? What is?

and recently I turned off the driver-side airbag.

Instead, I lie there quietly and watch my chest rise and fall as my breathing deepens.

MY FATHER HAD an idol shop.

‘Women can’t be rabbis,’ he said—shame all over the room, covering us both.

‘It can’t be, it isn’t a real thing. We should never have exposed you to that nonsense. That’s not for people like us, you know that!’

I did know, but I did it anyway.

I smashed them all up, every single one.

And worst of all, I placed the hammer in my mother’s hand and left them both behind.

They never spoke to me again. Not in this life.

THERE IS A POEM I love very much and say to myself like a prayer in the darkness.

Your laughter’s gonna come to drown and heal us all.

Look it up, it’s worth reading.

They say that when Abraham’s wife Sarah had her baby after years of trying, she laughed and that’s why they named him Isaac, which means ‘he will laugh.’

The story doesn’t really make sense, but that’s OK. Maybe it means that because she is laughing, one day he will too.

I laughed when Abigail was born. I thought she was being born into a better world.

I thought she would be free and that all the bad things that formed my parents and their parent’s parents and made them so afraid of living, were over for good and would never return.

OUR TIME IS NEARLY UP. I can tell by the way Dr. Rex tries to look at the clock behind my head without showing me he is looking.

‘Before I go,’ I say, ‘I will tell you my favorite Jewish joke.’ Dr. Rex looks surprised but nods, OK.

‘A Holocaust survivor dies and goes to heaven. When he arrives, he tells God a really unfunny holocaust joke.

And the survivor shrugs and says, Oh, well. I guess you had to be there.’

When I get to the end of the joke, the lights go out. It’s a thing that sometimes happens if we don’t move enough and when it does, one or both of us has to wave our arms until the lights come back on.

It isn’t easy to get up from the chaise lounge. He has to cross the room to pull me up. He uses two hands and, between the two of us, we manage.

I WALK SLOWLY BACK to the car. For some reason, I no longer care who might see me or what conclusions they might draw.

I think instead about how I would give anything to hear my parents laugh. And that maybe they would if they were here.

The joke is on all of us and it never gets old or dies and we can’t do anything but keep going. One hopeful foot in front of the other—rebuilding the broken idols, grabbing this something kind of life by the whatever we can hold on to and hoping one day, maybe one day, we will laugh and we will all be healed.

Deborah Zafer has work published or forthcoming in Janus Literary, Oranges Journal, Jewish Fiction and other outlets. She lives in London. @deborahzafer on twitter and www.deborahzafer.com.