I was two months into my twentieth year when my mother died. Her death felt sudden, even though she had been sick since I was in the third grade. She had a stroke under anesthesia for an umbilical hernia. After that came more strokes and grand mal seizures. Then, in 1985, she was diagnosed with breast cancer.

Her cancer hung over my high school years like a dark shadow. But it wasn’t the only darkness I had to deal with. My high school was located in a small, rural town in the Upper Midwest. The people of this town could never be described as friendly, especially to those they considered outsiders, and my family was
made up of swarthy foreigners with thick accents.

Perhaps most appalling to our neighbors was the fact that we didn’t go to church. I was harassed almost daily on the school bus for this offense. The children of churchgoers were especially cruel to me. They told me AIDS was my fault for not being a believer and that I’d be punished at the end of days. The tone of their words was so hateful I shudder to think about it too long. Out loud, they wished my family and I all would get AIDS and burn in hell.

I still cringe whenever I hear the expression Minnesota Nice. However, their favorite insult was to call me ugly. The townsfolk were all of Nordic, Germanic, and Finnish descent. They said my dark brown eyes reminded them of shit. My thick darkest brown hair reminded them of horsehair. My hourglass figure seemed to enrage everyone—girls and boys alike. Too feminine in a masculinity-revering part of the country. My aquiline nose they called an ugly witch’s nose. One boy in particular liked to sit in the seat before mine and call me ugly all the way to school—a nearly two-hour bus ride.

This was how I began most of my school days in small-town America.

Once at school, some popular kids surrounded me by my locker. I was confused since this elite group usually treated me like I had leprosy. “Hey, Squaw” they snickered. “We’re sorry about the buffalo.” Then they roared with laughter and high-fived one another before leaving me standing there. “I’m not an Indian. I’m Hungarian,” I yelled back. “Then why do you have yellow skin?” A bystander asked me. “I have olive skin,” I replied. They didn’t believe me because they didn’t know what a Hungarian was or what olive skin was, for that matter. Most of the admins and teachers didn’t know either. They referred to me as the “Russian” girl, because I spoke an “Eastern” language. It felt futile to try and explain myself. There was too much back- story to ever catch them up. I would have to try to explain my family’s experiences and European history and geography.

One evening, watching late-night TV with my father, a Woody Allen movie came on. My father said Woody Allen was ugly. I noticed that Woody and I had a few features in common—the same features kids at school teased me about. Meanwhile, I didn’t think Woody Allen was ugly—his large, dark, soulful eyes had me fully beguiled. He was smart. I had never heard anyone else, outside of my family, talk about famous composers: Beethoven, Schumann, Mozart, Russian literature, and the philosophers of existentialism. There weren’t any boys in rural Minnesota like Woody, I was sure of it. I decided to save myself for someone like him. When I told my mother I had a crush on Woody Allen, she looked concerned. This was long before he became a controversial figure. Her concerns came from a deeper place.

My mother didn’t want me to associate with Jews. This was easy to accomplish when we lived in Two Inlets, Minnesota, but no longer so easy when we moved to Los Angeles. My father was given an art studio in the La Brea Towers by his long-time employer—prominent businessman and art collector Louis Warschaw. I got a job at the nearest bookstore in the Farmer’s Market on Third and Fairfax. I spent all day with the Jews of this very Jewish neighborhood.

I started dating someone Jewish. My mother became frantic: “They’ll get you by association!” She cried. I didn’t understand. I assumed her illnesses were beginning to affect her emotionally.

Now I understand that it was a matter of life and death to her. She was afraid for my life. A life which she had done everything possible to protect. She escaped communist Hungary on foot, immigrated to the U.S.A., a new land she didn’t like. And more, so much more.

I began to dream about Jews, especially about the Holocaust. One night my roommate found me standing on my bed, clawing at the wall and crying. I dreamed I was in a gas chamber. I asked my Jewish friends what they thought. They were surprised to hear that I wasn’t Jewish. They had just assumed I was. I told my boyfriend, Tuvia, that my grandmother had a small old book in her room with a Star of David. He thought it was strange, and then confessed that he sensed something about me from the moment we met—something he called Yiddishkeit.
At the same time, my mother told me she had a crucial detail to share with me—a secret. She’d call and ask me to come over, but she’d begin sobbing and said she was too afraid when I got there. I waited by her bedside for hours, but she never did tell me her secret.

Then, suddenly, she died. I was on the phone with my brother when it happened. I heard my beloved mother yell out my name with such desperation it haunts me still. After that, she stopped breathing, and my brother slammed down the phone. I raced to the hospital, but she was already gone.

The following week, we had her body cremated. She had demanded to be cremated. One of the only such demands she made in her whole life, so we honored it. I watched her simple wooden coffin enter the flames of the crematoria. My heart began to race. I felt I was going to vomit. I went wild with horror and grief and ran from the building. Outside, gasping for air, I inhaled the sweet scent of my mother’s burning body through the smokestack, feeling faint. My father came out to check on me. He turned his head to look at the wreaths of smoke rising from the crematorium and shook his head. It sounds crazy, but at that moment, I knew I was a Jew and that I had a connection to the Holocaust. 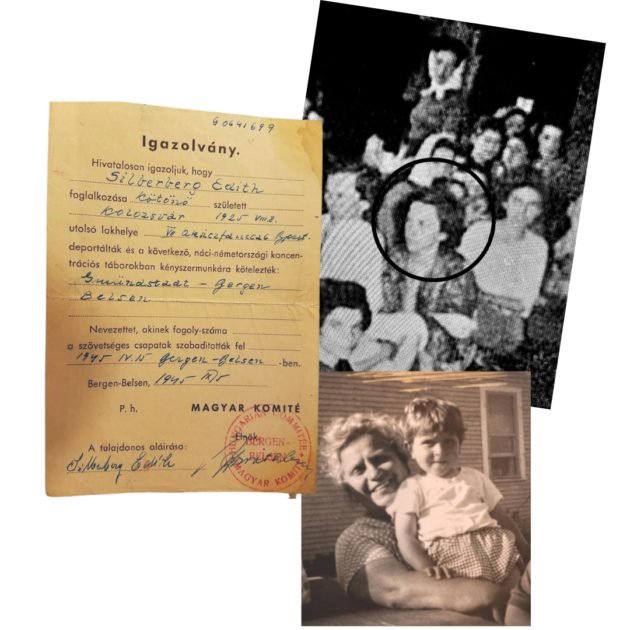 R: My mother was 46 when I was born. She wanted to try one last time for a daughter. Above: Where I first saw my mother’s real last name; On one of our visits to the Museum of Tolerance in 1991, we found a photo of my mother in Bergen Belsen. The photo is of the women’s barracks, full of typhus sufferers. 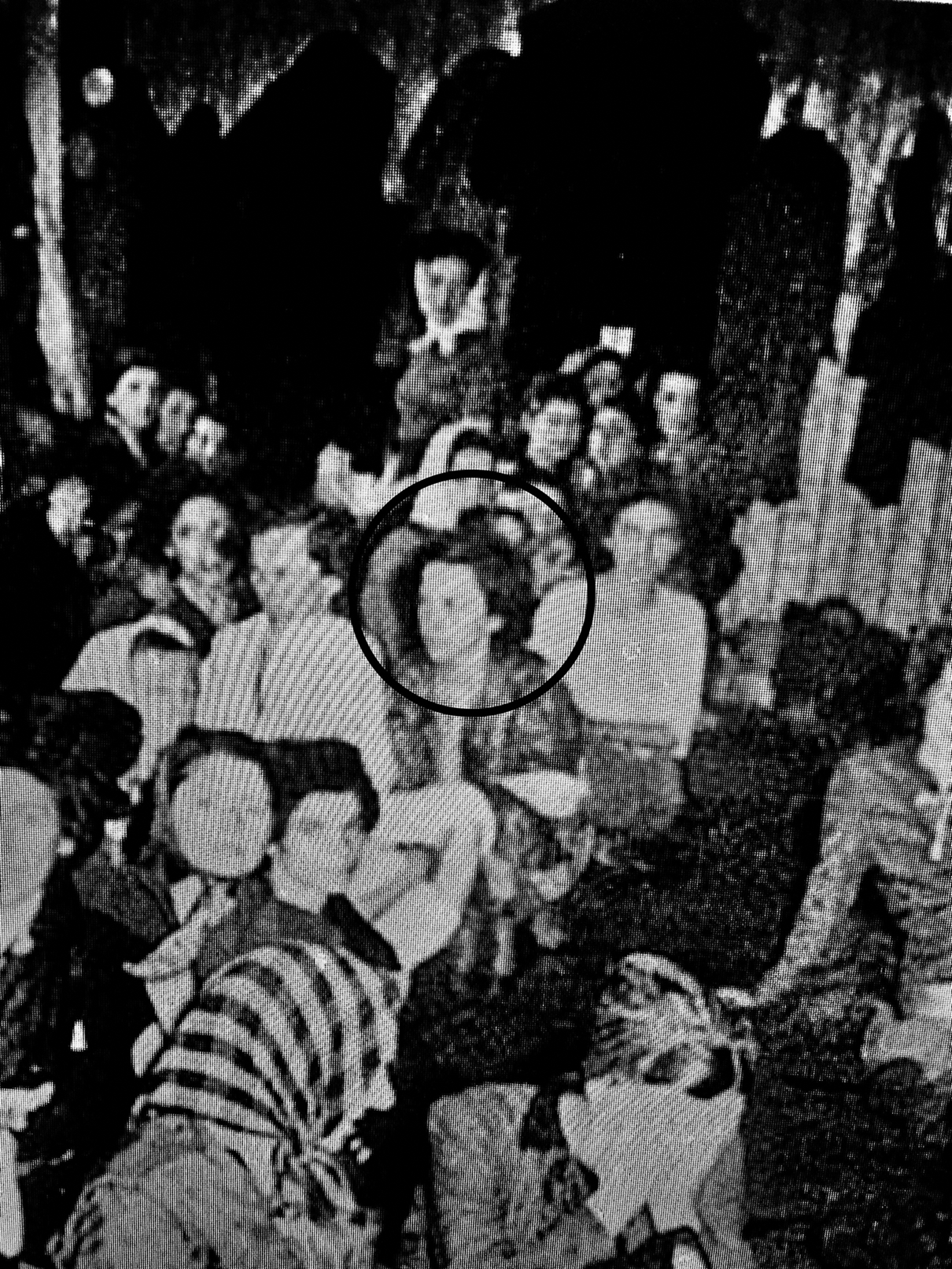 We went to celebrate my mother’s life at Canter’s Deli on Fairfax. I ordered my mother’s favorite matzoh ball soup, with one colossal matzoh ball in the bowl. Plenty of gentiles eat at Canter’s, of course, but my father’s choice of restaurants didn’t escape my newfound hunches about my ancestry.

When we got back to my parent’s apartment, I went to my mother’s dresser. She kept her hairbrush in the top drawer. I loved the scent of my mother’s hair. I wanted to smell her hairbrush before her scent disappeared. I noticed a small, yellow-with-age envelope beneath it. I opened it. Inside was my mother’s Displaced Person’s card issued by the Allied Forces, and her liberation papers from Bergen-Belsen—it was on this document I first saw my mother’s real last name: Silverberg. There were more documents. All bore the stamps of various Jewish agencies, including HIAS.

I called Tuvia, and we immediately went to the Museum of Tolerance, which was nearby, to have the documents authenti- cated. I cried when the young, Orthodox archivist told me they were real and that I was Jewish. “C’mon, it’s not so bad,” he attempted a joke. Then Tuvia took me to his rabbi at the Chabad in Westlake Village, who called me a talented investigator but jumped back two feet when I unwittingly tried to shake his hand.

My mother died on March 3. I discovered I was Jewish on March 9. I celebrated my first Jewish holiday, Passover, on March 30. I remember it was a stormy spring in Los Angeles. Rainwater roared through the city aqueducts. I had never witnessed so much rain before in Southern California. Everything seemed to be moving in slow-motion, and everything seemed so vibrant and clear. Grief has a way of transforming the most mundane sights into something memorable.

And then there was Passover. I’d never attended a Seder before. My boyfriend and his family cared for me after my mother’s death. Though I was grief-stricken, I helped Tuvia’s mother put together the seder plate. She explained the symbolic foods to me and kept grabbing my face to tell me she loved me. “Ah, I love you, Mamelah.” It wasn’t easy to smile, but I tried. I helped Tuvia’s father make salmon croquettes and chopped liver—these

With my return to Judaism, I felt like I was finally at home in the U.S.A. and within myself. Everything made sense—my grandmother’s Star of David prayerbook, Woody Allen, my Holocaust dreams, my soulful, haunted mother, the way I look, why we didn’t go to church. Everything. I also began to understand my mother’s demand to be cremated. She suffered from survivor’s guilt and wanted to join her many Jewish relatives and friends she lost to the gas chambers and the crematoria of the Holocaust. It was a form of homecoming for her as well, after the decades of hiding her Jewish heritage.

That memorable first seder was the most spiritual and profound ritual I had ever participated in. The Exodus story felt particularly apt. When we read that Moses didn’t know he was a Hebrew, everyone looked at me. “Just like you,” they said. “A Jewish soul always finds her way home,” Tuvia held my hand. We broke matzoh and drank wine in the warm glow of the candle- light, and even though the wound of my mother’s death hurt me deeply, I felt something I’d never felt before: belonging.

Julia Silverberg Németh is writing a novel based on these discoveries.