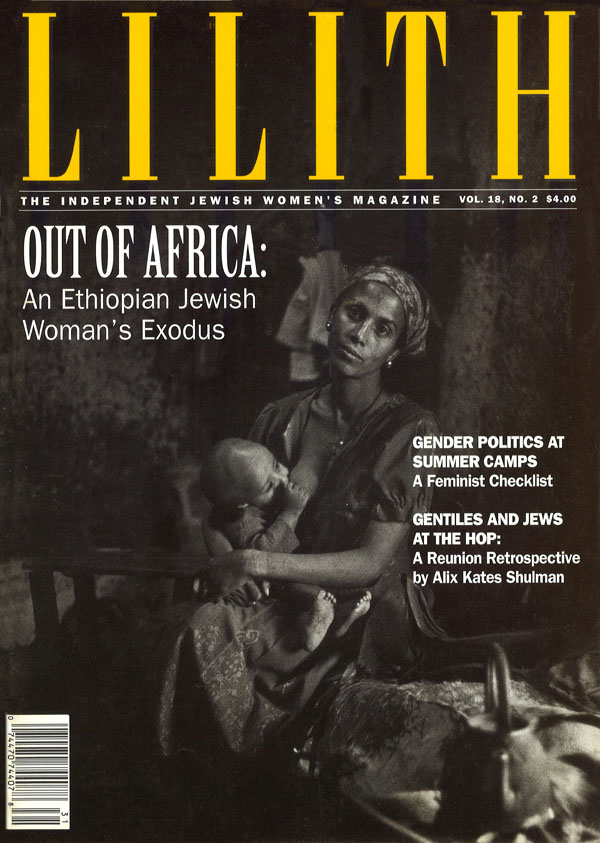 An Ethiopian Jewish woman’s rigorous journey to Israel. How summer camp shapes both Jewish and feminist identity. A Jew and a gentile are reunited at a class reunion.

A flickering in the kitchen. Of course. What else did I expect? Closed my eyes; must have slept. Then—something. (Nothing.) Something Like a ghostly telephone rrringing in my head as the heavy, black night table phone had rung out, three years ago, three-thirty a.m., three paralyzing rings. (If only I hadn’t picked up, whispered hello,... Read more »

CONNECTIONS Across Boundaries: A History of Jewish Women in America, a conference to lake place at the University of Maryland at College Park, October 31 to November 1, will explore the ways American Jewish women have functioned historically in their families and in the American and Jewish communities. Information: Professor Hasia Diner, Dept. of American Studies, University... Read more »

A Peephole into the World of Ultra-Orthodox Men

A beautifully written, engaging ethnographic study, DEFENDERS OF THE FAITH: INSIDE ULTRA-ORTHODOX JEWRY [Schocken Books, NY, 1992, $27.50 hardcover, $18.00 paper] might better have been subtitled “Inside Half of Ultra-Orthodox Jewry.” The author, Samuel Heilman, an American “modern-Orthodox” anthropologist, takes us as far as he can in observing this insular community which maintains strict rules of gender... Read more »

Follow My Footprints: Changing Images of Women in American Jewish FictionSylvia Barack Fishman, ed., Brandeis University Press, 1992, $45 cloth, $24.95 paper. At last, the book that begins to piece together a literary tradition by and about Jewish women. In Follow My Footprints, Sylvia Barack Fishman gathers together in one volume many of the sources that shape... Read more »

Her Share of the Blessings: Women’s Religions Among Pagans, Jews, and Christians in the Greco-Roman World

Her Share of the Blessings: Women’s Religions Among Pagans, Jews, and Christians in the Greco-Roman WorldRoss Shepard Kraeiner, Oxford University Press, 1992. $24.95 What if these scenes were a part of our tradition? “On his deathbed, Job has distributed his earthly goods to his sons, whereupon his three daughters complain. He assures them that their... Read more »

My Jewish Face & Other Stories

My Jewish Face & Other StoriesMelanie Kaye/Kantrowitz, Spinsters/Aunt Lute, 1990, $9.95 “See how you like my face, see how you like my Jewish-looking face,'” pronounces one character in Melanie Kaye/ Kantrowitz’s My Jewish Face, and the statement is as much confession as challenge. In a collection of stories spanning years of political activism and personal observation, Kaye/Kantrowitz... Read more »

HOT CHICKEN WINGSJyl Lynn Felinan, Aunt Line. 1992, $8.95 This eclectic collection of stories by lesbian feminist writer Jyl Lynn Felman is funny, painful, revealing, and very Jewish. As they explore what it means to be a woman and a Jew. Felman’s stories cover a lot of ground, exposing rabid anti- Semitism (sometimes in the... Read more »

Are You Sick? How to Beat the Evil Eye

From THE MERIT OF OUR MOTHERS: A BILINGUAL ANTHOLOGY OF JEWISH WOMEN’S PRAYERS (Hebrew Union College Press, Cincinnati, 1992, $16.95) come these 19th century instructions: Extinguishing Coals as an Incantation Against the Ayin Hare [evil eye]: The sick person should inhale the fumes from nine different colors of woolen clothing and should extinguish the glowing coals... Read more »

SLOW FIRE. Susan Neiman, Schocken Books, 1992, $23. Slow Fire is the story of the author’s years as a philosophy graduate student in Berlin from 1982 to 1988. Her anecdotes humorous and harrowing, are full of the urgency of a young Jewish American woman’s search for signs of Vergangen-heitsverarbeitung [working through the past,] as she studies life in... Read more »

In Running Fiercely Toward a High Thin Sound

In RUNNING FIERCELY TOWARD A HIGH THIN SOUND, by Judith Katz (Firebrand Books, Ithaca, NY, 1992), a Jewish lesbian, ostracized by her family and forbidden to attend her sister’s wedding, hides in the holy ark during the nuptial cermony: LOOK CLOSELY. Does the light flicker oddly from within the Holy Ark? Is there a woman pressed... Read more »

“I Used To Want to Be Miss California”

SHAYNA MAIDELS: ORTHODOX TEENAGE GIRLS. Produced by Lisa Kors, Box 325, West Stockbridge, MA 01266, (213) 933-4305, 24 minutes. After a few minutes of arguing with her father about why she won’t buy him non-kosher yogurt, Sinaia rolls her eyes in a typical adolescent manner and asks “Which is more important, my spirituality or your yogurt?”... Read more »

The Secret in Bubbie’s Attic

The Secret in Bubbie’s AtticProduced and written by Eva Grayzel and Suri Levow-Krieger, Ergo Media, 1-800-695-3746. $24.95 This adorable 43-minute video (appropriate for the 3 to 10-year-old crowd) gets four stars for Levow-Krieger’s original, bouncy, non-sappy holiday songs (they should definitely be released in songbook form), as well as for the kids’-fort, backyard quality of... Read more »

The Big Lie: A True Story

The Big Lie: A True StoryIsabella Leitner; Scholastic, 1992, $13.95 If it’s time for your child’s first Holocaust book. The Big Lie, recommended for ages 8 through 11, is a good choice. Anchored, warm, even a tad dull, Leitner’s steady, reassuring voice hides none of the brute facts: as a Hungarian-Jewish teenager, she is put in... Read more »

Out of the Depths I Call You: A Book of Prayers for the Married Jewish Woman

Havdalah, the ritual moment when one says farewell to Sabbath and faces the week ahead, provides the theme and the symbols for helping a woman friend get through her divorce.

For campers, some questions to ask; for counselors, some terrific feminist programs and resources; for parents, a checklist of what you really need to bring on visiting day.

How Our Mothers Nursed Us: The Children of Holocaust Survivors Revisit Their Infancy

Adult children of Holocaust survivors talk about their yearning for intimacy in an unusual therapy group.

Gentiles & Jews at the Hop

Kessaye Tevajieh is a thirty-year-old Ethiopian woman who in 1984 walked from her home in Addis Ababa to the Sudan, with her husband, Addis, to begin their journey to Israel (they were eventually airlifted in “Operation Moses”). Tall and slender, with fine features, she holds herself like cm aristocrat, proud of the fact that she... Read more »

The lowest rated network television series this spring season was the first one ever to examine the negative impact of the “Jewish-American-Princess” stereotype on young women. Fox’s “Class of ’96” confronted its freshmen with a spate of “JAP” jokes at fictional Havenhurst College. For “Jessica Cohen,” the anti-Semitism revealed by her classmates became a catalyst... Read more »

Tamar Gozansky, a Hadash party member of the Israeli Knesset [Parliament], has sent LILITH the following communique: A fourteen-year-old girl was gang raped and sexually abused for an entire week by eleven boys, aged sixteen and older, on Kibbutz Shomrat in Israel, in the summer of 1988. The girl complained to the police, but a... Read more »

A New Spin on an Old Tradition: Bringing in the Bride

The idea to fete Rachel on the eve of her wedding was not a radical one, because for many centuries Jews have celebrated hachnasat kallah or “bringing in the bride” to the wedding canopy. In fact, there is a rabbinic commandment to provide a dowry for brides and to rejoice at their wedding, and it... Read more »

While many women celebrated January 22nd, 1993, as the twentieth anniversary of Roe v. Wade, the Supreme Court decision protecting a woman’s right to abortion, others, in a horrifying and dangerous manipulation, labeled the date as the beginning of the “American Holocaust.” As part of an inflammatory anti-choice propaganda campaign, a Kansas-based organization produced this pin,... Read more »

A Jewish Feminist Contribution to Multiculturalism

Leslea Newman, whose story “A Letter to Harvey Milk” appeared in LILITH’s Fall 1988 issue, has recently received considerable attention for her children’s stories, noteworthy- independently-for their lesbian and Jewish contents. Newman is the author of Heather Has Two Mommies (Alyson Publications,1989) a children’s story about a lesbian family which appeared on the original list... Read more »

Nestled in the heart of upstate New York, in a small town called Seneca Falls, stands the Women’s Hall of Fame. Women’s history buffs will recall the historical significance of Seneca Falls, which hosted the 1848 “Women’s Rights Convention, attended b}’, among others, Elizabeth Cady Stanton and Susan B. Anthony. Their faces are among the... Read more »

Surviving Incest I want to thank LILITH for the articles on incest in Holocaust families [Winter ’93]. I was interested in the writer’s feeling that her father’s abuse may have been a result of his victimization by the Nazis. Wouldn’t it be helpful to try and find out if he had been sexually abused before the Holocaust, perhaps... Read more »

This issue is about journeys—physical and metaphorical. Sociologists and social workers have begun to explore the stresses that Ethiopian Jewish women endure in adjusting to late-twentieth-century life, as well as the gender conflicts they experience when traditional patriarchy confronts a more egalitarian Israeli lifestyle. But the path these refugees take in escaping from Ethiopia—where, says... Read more » 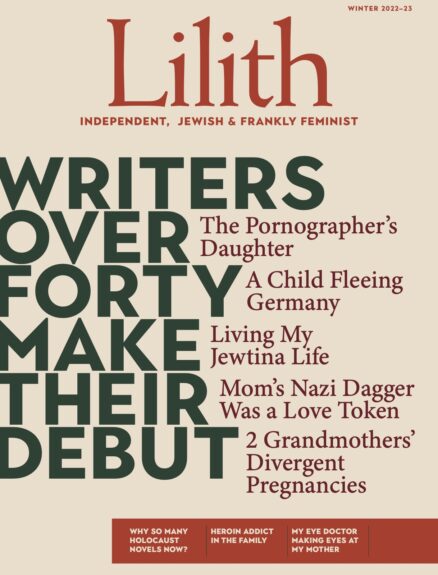 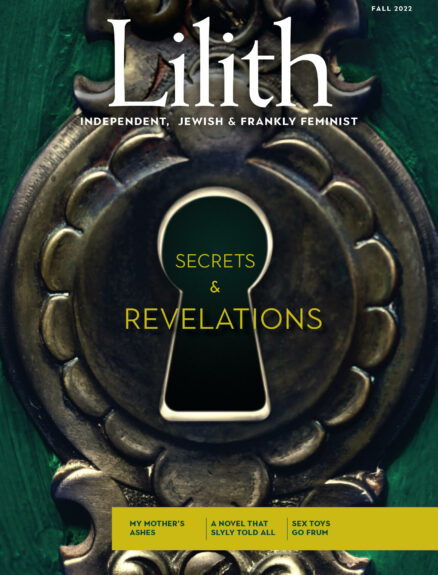 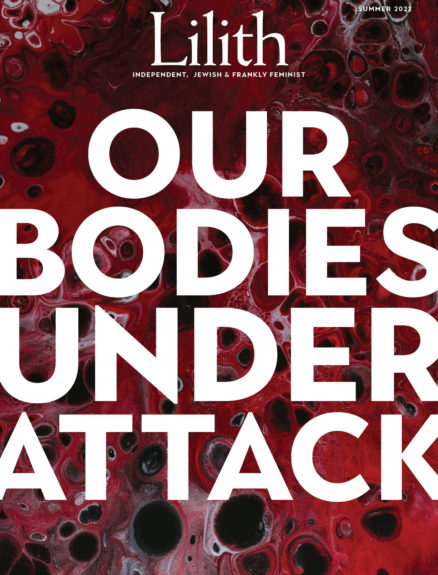 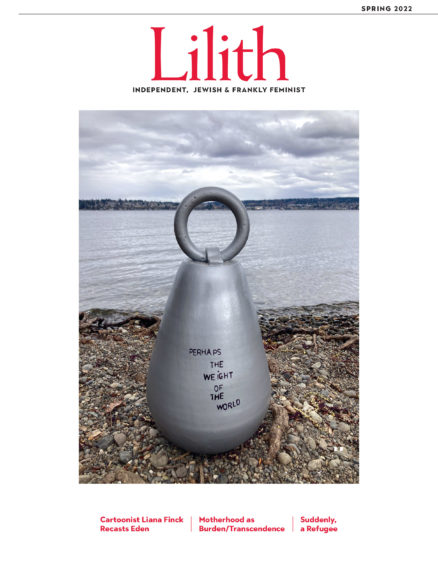