The famous Omphalos of Delphi, Greece, was a powerful religious symbol marking Delphi as the cosmological center (or navel) of the universe. Although scholars, even today, refer to the Temple at Delphi as belonging to Apollo, it clearly was an Earth Goddess site—a shrine dedicated to Gaia—in origin, one of many such sites that was later re-mythologized to be male-centered and female-silencing.

The high priestess, or Oracle of Delphi, prophesied from a serpentine cave with an underground water source that was believed to be Gaia’s navel, the site from which everything on earth was birthed. Like many earlier female-centered religious sites, a temple to a male God was later built above it. There is a case to be made that the ancient Holy of Holies in the Temple in Jerusalem represents a similar appropriation over a female-centered underground worship site.

In the original Delphic myth, Zeus’s father Cronos eats his children one by one, but Zeus’s mother Rhea fools her husband by wrapping a stone in swaddling—these are the high-relief markings seen here on the Omphalos—and Cronos eats this, thinking it is his son. The Omphalos was placed in the cave, at a spot where underground hallucinogenic “vapors” were “divinely translated” by the Oracle of Delphi.

The Omphalos of Delphi is also called a “baetyl”—a sacred stone that “contains,” in some way, epiphanic experiences of a deity. Yes, it is likely the same word as “bethel”—“house of God”—the stone/pillow where the biblical Jacob rests his head, has a divine vision, renames the spot “Bethel,” sets up the stone as a “pillar,” anoints it with oil, and proclaims, as with a baetyl, “God is in this place, and I, I did not know.” In patriarchal fashion, however, Jacob proclaims the stone a “gate to [a male] God in heaven,” rather than a gate to a female Goddess of Earth.

If you’re wondering why the Omphalos of Delphi is an “outie,” rather than an “innie,” the accompanying article explains “ex negativo,” a shift in perspective that demonstrates how the navel can not only represent an inward wound, but also an outward expression of selfhood and lineage. And there’s more…. 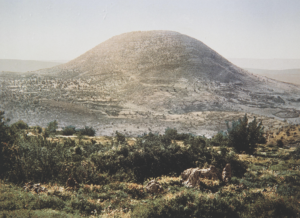 Why, you might ask, has Lilith placed a photo of Mt. Tabor here? Because “taboor” means bellybutton in Hebrew. This is Mt. Bellybutton.

“Ask a child to draw a picture of a mountain and the result will look a lot like Israel’s Mt. Tabor: a simple sphere topped by a neat cap, surrounded by a green valley,” states an Israel guidebook.

“There are very few mountains that look like it in the world,” says tour guide Gil Haran. “It’s not a very high mountain compared to the surrounding area; the mountains in Nazareth are higher. But it sticks out in the middle of a flat valley in a perfect shape that makes it unique.” Geologically speaking, it’s singular: an isolated, dome-shaped monadnock.

Mt. Tabor, too, like the Omphalos of Delphi [see caption] is ex negativo. The long, winding path up to the summit, part of the Israel National Trail, can be experienced as a 4500-step climb up its umbilical cord. An Arab village in the mountain’s foothills is named Daburiyya—a variation of the name Deborah. Oh, yes, the name Deborah also means bellybutton. And whither did the prophet Deborah summon Barak? To Mt. Tabor. That’s a lot of navel happenstance.

Jesus’s Transfiguration occurred on Mt. Tabor, but, of course, that was a religious appropriation: the mountaintop was a pilgrimage site centuries before that, and there have always been, and continue to be, significant religious sites on top—monasteries, churches, basilicas, mosques, shrines, “cave shrines” (with water), springs, the requisite ruins squatting atop ruins. The prophet Hosea, chapter 5:1, rails against Mt. Tabor’s idolatry: no surer sign that something, likely female-centered, was having its heyday. I wish we’d been there.