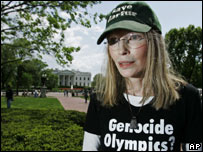 Mia Farrow is an active part of the “Dream for Darfur” campaign.

Officially, the Olympic Games are a series of sport competitions, but unofficially they are a global arena for political activities. In the 20th century, Hitler used the 1936 Olympics in Berlin as a platform to promote Nazism; the Palestinian extremists “Black September” killed Israeli athletes at the 1972 Olyimpics Games in Munich as a display of their anti-Zionist beliefs; Jimmy Carter pushed the United States to boycott the 1980 Moscow Games as a response to Soviet aggression in Afghanistan; and South Africa was banned from participating in the Olympic Games until they ceased their apartheid policies in 1992.

And now in the 21st century, the Save Darfur Coalition is using the 2008 Olympics in Beijing as an opportunity to highlight the Chinese government’s compliance with the Sudanese government’s genocidal campaign against the Darfurians. China is the largest supporter of Sudan, buying approximately 80% of Sudan’s oil. Sudan uses a considerable portion of its oil revenues to finance the genocide in its western region of Darfur. Save Darfur’s latest campaign “Dream for Darfur” aims to shame China into pressuring Sudan to stop its genocidal practices and immediately deploy United Nations-African Union hybrid peacekeeping force.

The “Dream for Darfur” relay began in Chad on August 9 and will continue over the course of four months. It will pass through cities that have historical ties to mass atrocities including: Yerevan, Sarajevo, Berlin and Phnom Penh, as well as many other cities in the United States.

The anti-genocide activists’ clamor over the “Genocide Olympics” has already influenced Steven Spielberg to demand that China change its policy towards Sudan or else he would step down from his position as the 2008 Olympics’ artistic director. Immediately following Spielberg’s threat, China sent a special envoy to Sudan.

When did celebrities replace politicians, and sport competitions replace international diplomacy? Why is Stephen Spielberg, and not President Bush, writing letters to China’s President Hu Jintao? It seems that our world leaders’ ineptitude at resolving the crisis in Darfur has left a vacuum that is being filled with athletes like Joey Cheek who donated his Olympic prize to Darfur relief efforts, and actors like Mia Farrow, who recently carried the Dream for Darfur Olympic torch in Kigali, Rwanda to commemorate the Rwandan genocide.

Regardless of whether it is right for sport competitions and celebrities to take the place of international diplomatic forums and politicians, the reality is that the 2008 games are politically charged. While the “Dream for Darfur” torch is traveling across the globe, the people of Darfur must continue to wait for the relief they have been falsely promised countless times by politicians who crudely allow athletes and celebrities to do their work for them.