Six months after they began their relationship, Michelle and Aimee knew that theirs was a lifetime commitment, and they wanted to mark this in some way. Originally they planned to move in together and have a housewarming party. But when they found themselves inviting friends to “a little thing” at their home, they realized they needed to sanctify their relationship Jewishly. After five months of planning, consulting, writing, and shopping, Michelle and Aimee held their commitment ceremony before 90 family members and friends.

What distinguished this ceremony from many other gay and lesbian weddings is that Michelle and Aimee are halachically committed Jews. As such, both women took the liturgy of their wedding ceremony very seriously. Many Jewish couples marry without understanding the texts that a traditional Jewish wedding comprises. Michelle and Aimee, however, scrutinized every sentence of the ritual to determine how they could both respect the integrity of the texts and also adapt them to their situation. Could they call the ritual kiddushin, the legal term for a Jewish, heterosexual marriage? What could they say instead of the traditional betrothal formula, which declares that the ceremony is “according to the law of Moses and Israel”? Questions of liturgy—not food or decor—preoccupied Michelle and Aimee from the moment they made their decision.

Michelle and Aimee both grew up in Conservative Jewish homes. They now belong to a traditional, egalitarian minyan. Observant Jews in theology and practice, they both came to a “progressive, interpretive” understanding of Judaism, “independent of gay issues.” “Nothing has changed [religiously] in my life since I came out,” declares Michelle. Some have questioned how Michelle and Aimee—who observe Shabbat, keep kosher, and pray daily—reconcile their practice with halachic Judaism’s negative view of homosexuality. Michelle and Aimee respond that they place traditional Jewish views of homosexuality in the same category as other problematic Jewish texts and issues. “There are [passages] in the Torah about genocide that bother me but that doesn’t mean I don’t read about Amalek,” says Aimee, referring to Deut. 25:17-19, and its commandment that Jews wipe out the descendants of their biblical enemy, Amalek.

When they first decided to have some type of ceremony to mark their mutual commitment, Michelle and Aimee were both uncomfortable referring to the upcoming event as marriage. The turning point for them came one Shabbat morning at services when one couple had an aufruf (an aliyah traditionally given to the couple on the Shabbat before their wedding) and another couple announced their engagement. Michelle and Aimee saw how much joy surrounded those couples and concluded that they, too, desired and deserved similar support and emotion from their community, to celebrate their union. Soon they began telling people that they were getting “married” and planned to have an aufruf at their shul.

Finding a rabbi to officiate at the ceremony was a challenge, because rabbis who would officiate at a gay wedding tended to be too liberal for the couple’s traditional perspective, and rabbis who shared Michelle and Aimee’s concern with halacha would not (or could not) participate. Two Conservative rabbis declined to officiate because of political considerations. Another rabbi turned them down for the same reason he would have refused a heterosexual couple: he did not know them well enough. In the end, a lay friend of the couple’s officiated at the ceremony.

In planning their ceremony, Michelle and Aimee devoted most of their energies to examining the traditional wedding liturgy. As they explained in the booklet they prepared for their guests, “As traditionally committed Jews, both of us recognize that what we are doing here today is not kiddushin. a Jewish legal term used to describe a heterosexual marriage. We feel strongly, however, and we hope that you will agree, that it is certainly as valid.” They decided to call their ceremony a kiddush ahava (sanctification of love), a term that retained the k’dusha (sanctification) aspect of kiddushin.

In planning their traditional ceremony, Michelle and Aimee relished the freedom they felt in making changes compared with the relative constraints on a heterosexual couple. “But again, that didn’t make us feel that we had total carte blanche,” added Aimee.

The next hurdle was the betrothal formula: “Behold, you are consecrated to me by this ring according to the law of Moses and Israel.” As traditional Jews, Michelle and Aimee felt that they could not say these words. As Michelle explains, “it seemed too radical. How can you possibly say this is ‘according to the laws of Moses and Israel’?” Instead, they chose to recite the verse associated with donning tefillin (the small, black leather boxes a traditional Jew would strap to forehead and arm while reciting the morning prayers): “I will betroth you to me (v’erastich) forever, I will betroth you to me with righteousness, justice, kindness, and mercy. I will betroth you faithfully, and you shall know Adonai.” They liked this verse both because it linked their relationship to the love between God and Israel and because, as Michelle explained, “it sounds legal, because erusin is a word that is part of the traditional wedding ceremony” and is a form of the verb erastich. The verse is also included in their ketubah and inscribed in their wedding rings.

Michelle and Aimee’s love for and knowledge of Jewish tradition was most eloquently expressed in the alternative they prepared to the traditional sheva b’rachot (seven blessings), a key part of the Jewish wedding.

Michelle and Aimee wanted to use the form of the sheva b’rachot, but not the content, because they felt that many of the blessings were not relevant to their situation. They also did not want to change the existing blessings as neither is interested in “creative liturgy.” Instead, they decided to use shiv’ah mekorot (seven texts). They began gathering their favorite biblical, rabbinic, and liturgical texts and ended up with 35—too many! As they sifted through the texts, they noticed categories emerging: some verses described their relationship to each other, some their relationship to their community, some related to family, and some to God. Choosing seven texts, they arranged them from personal to communal to transcendent. At the ceremony, pairs of friends recited in Hebrew and English the chosen verses along with Michelle and Aimee’s explanations of each text’s significance to them. [See below.] One pair of friends sang their assigned blessing, another person added his own commentary, and another, with a yeshiva background, recited the text in a traditional Talmudic sing-song style. 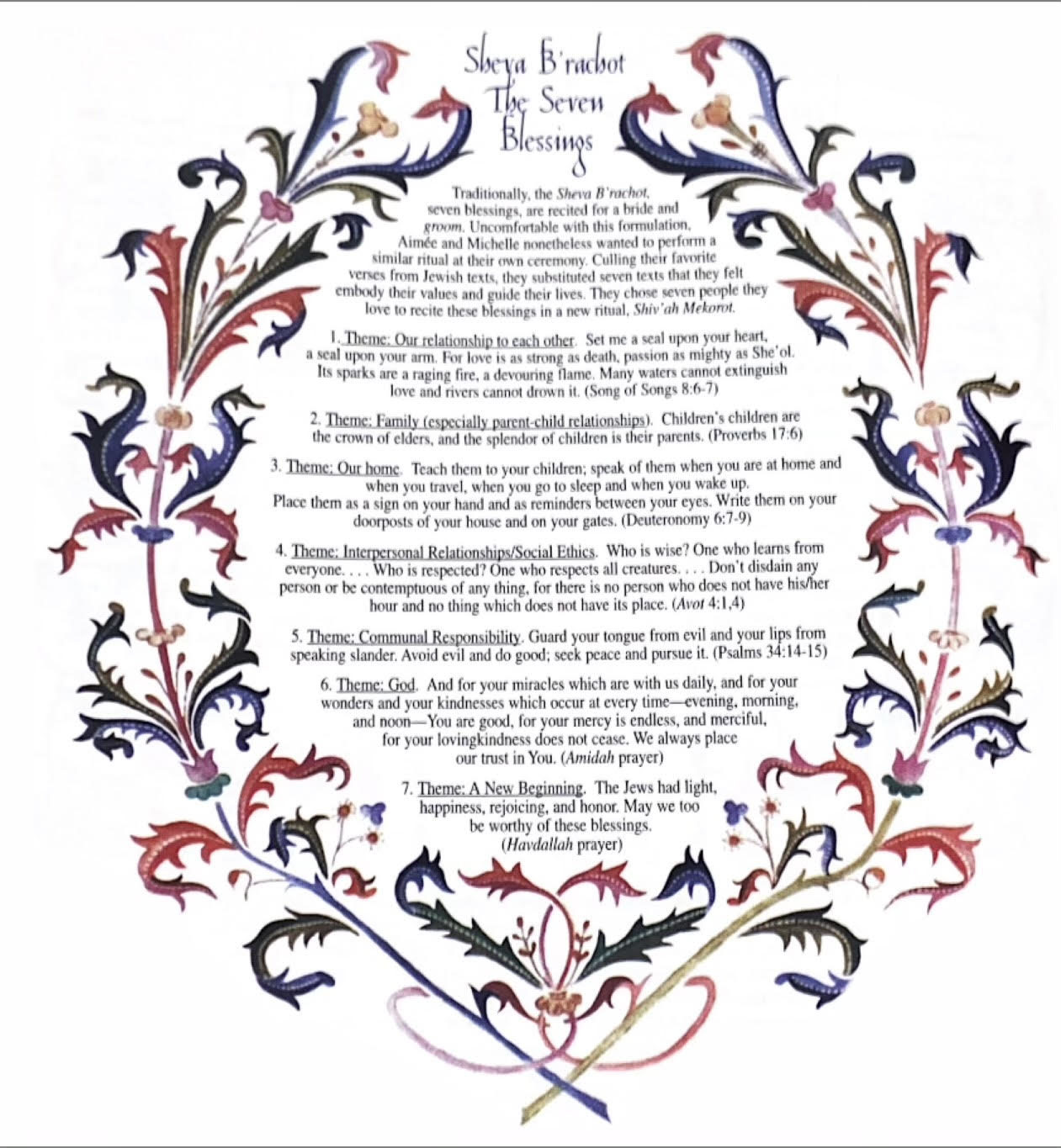 Because liturgy was the most important focus for Michelle and Aimee, they put their parents and friends in charge of the reception. The ceremony raised the “family issues” that most gay and lesbian couples confront: their families’ reactions, which ranged from blatant disapproval to reluctant acceptance to outright enthusiasm and support. In the end, all parents overcame their reservations and participated happily.

Aimee’s mother’s was initially concerned about the public nature of the ceremony. Ultimately, Aimee says admiringly, her mother “really worked it through.” For the reception, Aimee’s mother rented tablecloths, bought matching serving pieces, and made centerpieces for all of the tables. After the ceremony, she even brought photographs and the couple’s wedding booklet to show her colleagues at work. After Michelle came out to her family, they began attending P-FLAG [Parents and Friends of Lesbians and Gays] meetings. And once her parents were assigned their specific tasks for organizing the wedding reception, they became excited and involved. Michelle’s mother spent weeks shopping for decorative objects to adorn the tables and silver-plated serving pieces.

Michelle’s grandfather, an Orthodox rabbi in his 70s, surprised both Michelle and Aimee with his reaction to their Kiddush Ahava. According to Michelle, his first response was mere acceptance of the situation. Yet, once he saw their involvement with traditional Judaism and got to know Aimee personally, he became very enthusiastic. He even led the Grace After Meals in his old-world accent by saying, “Birshus ha-kalles, yefos to’ar u-yefos mareh” (“In honor of the beautiful brides”). Aimee says, “It blew us away.”

At the end of the ceremony, Aimee stamped on a glass. After many months of planning each ritual in detail, and after weeks of discussing which one of them should perform this last—traditionally male—act, the couple decided the night before the ceremony that Aimee should do the honors: Michelle was planning to wear open-toed shoes.

Aimee and Michelle’s last names have been omitted to protect the couple’s privacy.

Susan Sapiro is a researcher at the Heritage Interactive Project, a multimedia Jewish history project, at WNET in New York City.