“It was like a secret groove had been carved, and some invisible bumpers were going to keep pushing me back into that groove, the Jew groove, Sarahland.” So begins the eponymous short story collection Sarahland [Grand Central, $15.99] from Sam Cohen, an imaginative debut that examines narrative, creation, and desire through the lens of various (Jewish) people named Sarah. “It was confounding when I learned Jews were only 3 percent of the country,” the first Sarah narrates, speaking about her experience in an all-Jewish dorm in college, “because, where was everybody else?”

Sarahland could be Hannahland could be Leahland or Rebeccaland. But Cohen is a deft and inventive storyteller, who reels you in with the titular story, building your expectations for the kind of Sarahs she might explore—and then takes a sharp turn off that familiar highway. As the collection unfolds, it’s clear there isn’t one kind of Sarah at all; even the background Sarahs in the first story, Prada-wearers on the surface, are thrumming with inner lives. Cohen’s Sarahs are queer and drifting and angry and filthy and funny. 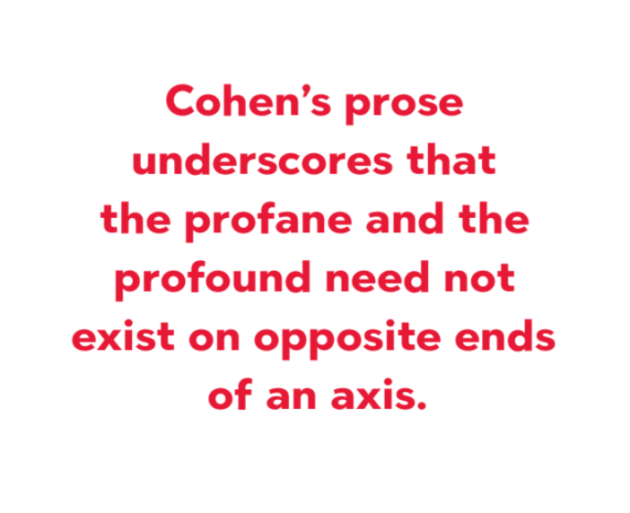 Being Jewish and being queer are the twin starting point for most of the Sarahs, but each Sarah is searching for a way to define herself. For some, this means an obsessive focus on individuality—in a sea of Sarahs, how do you stand out? For other Sarahs, individuality is a burden— in “Exorcism, Or Eating My Twin,” Sarah wants to melt into her partner, stretching their relationship into something two-headed and united. “My therapist wants me to practice saying my name over and over again, introducing myself to myself, ‘Hi, I’m Sarah,’ but this feels too humiliating to even try,” she laments. “So mostly I lie on my therapist’s beige couch and wail and then go home and think, What’s so great about individuating anyway…”

Later, she states her desires even more simply: “There were so many different reasons someone might want to eat someone else.” If Sarah really could eat her partner—consume them, absorb them, build an entirely new person comprised of two previously separated human beings—would they still be Sarah?

“The First Sarah” is a particular standout among the stories—reimagining the Jewish matriarch in love with Hagar and capable of creation all on her own. “Becoming Trees” is equally absorbing, and unexpectedly moving—tracing the decision made by an aging lesbian couple to literally give themselves back to the Earth. “Worlds can be made in six days, I realized,” the Sarah of Becoming Trees muses. Later, as her (literal) transformation into a tree gets underway, she notes: “when I stood in the dirt on my bulbed feet, I felt a feeling I’d never felt before, a cunty surge that went from my roots to the crown of my head and out like a beam.” I felt a similar jolt as I read, delighted by how defanged and appropriate the word cunt felt within the world of the story. Cohen’s prose underscores that the profane and the profound need not exist on opposite ends of an axis.

The final story, “The Purple Epoch,” imagines a world beyond Sarahs—all human life destroyed, with plastics and Styrofoam floating on a sea of iridescent oils and the bones of everyone who ever lived. “Hollowed out clownfish stick and dry on the femurs of former Sarahs,” intones the omnipotent narrator (God? The Ultimate Sarah?). “Their bones would look the same, if anyone was there to see them—dolphin scientists and dungeon Mistresses, sad girl poets and trophy wives, oil drillers and onion harvesters have become piles of ivory sticks, tumbled smooth like driftwood by the radioactive sea.”

“No one is ever named Sarah again,” Cohen writes, and having spent the last two hundred pages in Sarahland, it’s a genuinely devastating prospect.

Justine Orlovsky-Schnitzler is a folklorist, reproductive rights advocate, and amateur baker currently at home in the South.