What’s not to like about an assertively Jewish film? This excerpt is from Chap. 5 of the author’s Movie-Made Jews: An American Tradition, a book dedicated to Klal Yisrael, in all its diversity.”

Shot in thirty days on a scant $175,000 budget, Romeo and Juliet in Yiddish (2010) is a Chagallesque mumblecore film. Mumblecore is an indie subgenre that features nonprofessional actors, improvised scripting, and a focus on young adults. The protagonist of the frame narrative is a graduate student at Brooklyn College (in the not-so-subtly subtitled “Normal Brooklyn”) who supports herself as a nurse.

In order to keep her scholarship, Ava (Eve Annenberg) is required to translate Romeo and Juliet into Yiddish, a task at odds with her aversion to Haredi culture. Although Ava tries to justify this aversion by claiming that “everyone hates the Orthodox,” she is haunted by her born-again Jewish youth, during which she bore and then was forced to abandon a daughter when she fled her Haredi community. Due to her linguistic inadequacy, she needs help translating and updating the play. To this end, she hires Hasidic youths who are struggling—and scamming—to survive in exile from a community much like the one she left.

As she and they learn about one another, the play within the movie develops…Writing themselves into a classic love story forbidden to them by their yeshiva education, the Hasids recast the Montagues and Capulets into the Satmars and Chabadniks at war with one another in a Brooklyn seemingly at odds with the “normal” one in which Ava studies.

Romeo and Juliet first meet not at a ball but at a Purim party, a fire escape supplants the famous balcony, and Rabbi Lawrence is the not-so-close double of Friar Laurence. Those who play the warring Hasidic sects are, in real life, off the derech, that is, have themselves left the Orthodox communities into which they were born. Thus the offscreen lives of the translators/Shakespearean actors significantly overlap with what appears onscreen. In this way, Romeo and Juliet in Yiddish extends the tradition of Yiddish crossing boundaries to include that of fiction, film, and documentary.

The question of who needs to assimilate to whom dominates the film. On the one hand, the Hasidic youths in exile know nothing about Shakespeare or romantic love, and their English belies the fact they were born and bred in Brooklyn… Yet, they are also the ones with deep and valuable Jewish knowledge, including Yiddish. Prior to Ava’s hiring of the Hasidic youths, she tries to learn Yiddish on her own. In a remarkable montage of study, we see Ava wrestle with a Yiddish-English dictionary, Miriam Weinstein’s A Nation of Words, Yiddish for Dummies, as well as The Complete Idiot’s Guide to Learning Yiddish. Bleary-eyed and frustrated, she tries to discern Yiddish text, and the sentence “You are an inadequate Jew and You Will Never Get This” appears before her…

Adapting Shakespeare’s Romeo and Juliet is a negotiation with one of Western culture’s ur-tales of tribal warfare. This film aptly uses this canonical tale to illuminate and renegotiate fault lines within Jewish communities. While the Yiddish play reimagines the Montagues and Capulets as warring observant sects, one actor named Lazar’s desperate life is shaped by his father excommunicating him for leaving home and cutting off his earlocks. And the acrimony between Ava and the homeless Hasidic youths she has hired is a result of their inhabiting “two different Judaisms,” defined by sexual and educational distinction…

Yet the opposition between Ava and her hired Hasids is not as extensive as it first appears. Yes, Ava does not observe kashrut, made abundantly clear when the only food she has to offer the hungry Hasidic youths consists of leftover Chinese: shrimp with broccoli, crab rangoon, and spare rib tips. Yet, when her colleague and friend Melody (Melody Beal, Annenberg’s neighbor and best friend) brings Ava her required free-trade coffee with soy milk, this Black, Jewishly literate nurse smartly observes that “with these many rules, you might as well keep kosher.” At one point, Ava tells one of the Shabbat guests who has evinced romantic interest in her: “I don’t just dislike your culture, I hate your culture.”

However, both Ava’s past and present are deeply intertwined with Orthodoxy, emphasized with shots of Ava hanging out in a Haredi neighborhood every Sabbath in hopes of glimpsing the daughter she left behind. When Lazar and company are getting ready to leave, she is forced to admit that she does not hate them, a sentiment underscored when she literally saves Lazar’s life and reassures him, “We’re not fighting, sweetheart. There’s nothing to fight about.”

Ultimately, Shakespeare’s words “my only love sprung from my only hate” and “all these woes shall serve for sweet discourse in our time to come” undergird the crossing of Jewish boundaries at the heart of this film… Indeed, at the UK Jewish Film Festival, half of those attending were Hasidic, not a usual occurrence for the festival. While many left during the sex scene between Romeo and Juliet filmed to a rendering of the haunting High Holiday prayer Avinu Malkeinu, they returned to watch the rest of the film. 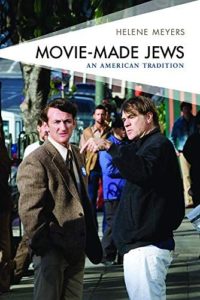 Helene Meyers is a Professor of English and McManis University Chair at Southwestern University in Texas.