Before you turn the page and enter a world where menstruation is a subject of performance art and hormones are being touted as the drivers of all aspects of our lives, let’s acknowledge the whiplash of living through rapid shifts regarding our hormonal selves. There was a time—well into the 20th century, in fact—when women’s concerns, be they personal or political, were considered “hysterical,” originating in the womb. Periods, like pregnancies in the Victorian era, were to be concealed and were never discussed in public.

Not only was period talk taboo, but menstrual blood itself was actually considered dangerous. Citing a 1934 article, here’s what appeared in the pamphlet Jewish Family Life: The Duty of the Woman, published by Agudath Israel Youth Council of America in 1953 and provided to Lilith by Sheri Sandler, who found it among her late mother’s papers: “a toxic substance is present in the blood serum, blood corpuscles, saliva, sweat, milk, tears, urine and other secretions of women at the time of menstruation.”

Then, as women staked claims to some share of the power and the pie in the heyday of the women’s movement, from the late 1960s through much of the 1980s, no women with any feminist cred would have wanted her behavior labeled hormonal in origin. Granted, some iconoclastic artists dabbled in painting with menstrual blood, but mostly women wanted to think of themselves as just like men, capable of advancing in the universe as long as the costume included, for a certain stratum, power pantsuits. Children at home? Never mentioned at work. A migraine because of one’s period? Not at all—merely the result of a late night working on a report. Parody aside, keep these rigid standards in mind as you think about the current evolution of “period talk.”

Interestingly, at the same time as Jewish women were eager to advance in a “man’s world” by keeping hormonal matters out of sight, there were women creating new traditions around a typical distinguishing characteristic of female bodies— bleeding once a month from menarche to menopause. (Some of these rituals for a first period or for marking the cessation of periods spotlighted in Lilith.) Jewish law is pretty specific and matter-offact about women’s periods, what one cannot do while menstruating (have sex with one’s husband) and how to determine when a period has ceased (examine one’s vaginal canal with a clean piece of cloth; if in doubt, show the cloth to a rabbi).

The idea that we’re all embodied selves had to be stashed away so women could go to law school and rabbinical school and business school without being told (as many students were as recently as the mid-1960s) that their gender rendered them unfit to occupy the classroom seats they were so obviously seated in. Today, posts on social media will announce a person’s “phase of the moon” with the same forthright conviction used a few decades ago to discuss the implications of one’s astrological sign. And as you’ll see when you look at the titles of the new books on hormones and periods, we can now safely take our bodies out of the storage unit where, presumably, they’ve been renting space for quite a while. 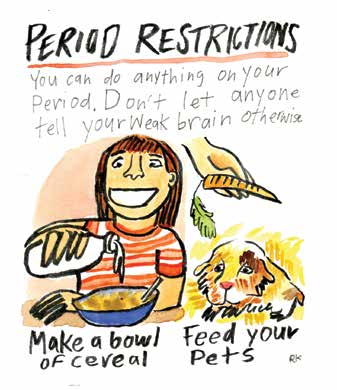 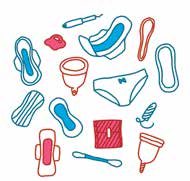