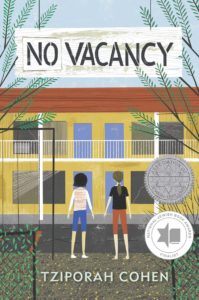 No Vacancy
by Tziporah Cohen (Groundwood Books, $16.95)
A contemporary Jewishly connected family relocates from New York City to take over a crumbling motel in rural NY State, hoping to make a new life for themselves. Before long it seems clear that they are in need of a miracle to make a go of it. Spunky eleven-year-old Miriam and a new friend decide to take on the challenge, with some surprising results, and eventually an interfaith community of well-drawn characters comes together to respond to antisemitism in this nuanced and heartening debut middle grade novel by Toronto-based oncology psychiatrist Tziporah Cohen. 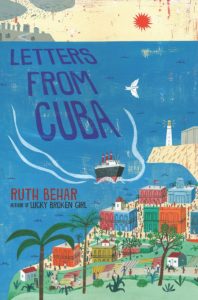 Letters from Cuba
by Ruth Behar (Nancy Paulsen Books, $17.95)
Based on her own grandmother’s experience, Lucky Broken Girl author Ruth Behar, an anthropologist, offers fictionalized letters of twelve-year-old Esther, writing to her sister back in Poland about her journey to Cuba. She is the first in the family to join their dad who came three years earlier to earn and send back money to feed his family and hopefully bring them all over to join him. Esther experiences a new culture, bananas, blessings, the gift of a golden stopwatch, hardships, but also the kindness and generosity of strangers, and finds creative ways to help her family. 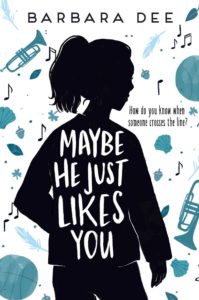 Maybe He Just Likes You
by Barbara Dee (Aladdin, $17.99)
#MeToo for middle graders. Seventh grader, Mila, who has responsibilities at home for a younger sister, a dog, and making supper—becomes the object of teasing and unwanted touching by a group of male classmates who think it’s harmless fun and even compete for points in harassing her. Mila’s restrained protests and complaints are greeted with disbelief, cynicism, blame and even jealousy, causing her to feel more and more isolated until things build up to a dramatic explosion that along with the discovery that she is not the only one this has been happening to, finally prompts efforts at intervention at school. 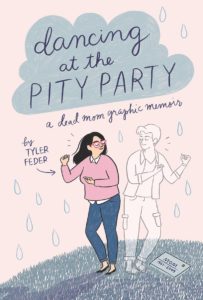 Dancing at the Pity Party: A Dead Mom
Graphic Memoir
by Tyler Feder (Dial, $18.99)
In a format that lends well to her story, Tyler Feder shares, ten years later, her mother’s illness and death when the author was a sophomore in college. Told and illustrated with candor and humor, this bittersweet and easy-to-read young adult debut shows the trajectory of life before a cancer diagnosis, accompanying an ill mother, funeral rituals and shiva—which sometimes feels like a party. It’s about the feelings and experiences that remain, that stay with her in spite of their pastness, and those that have been given up to a new reality.

Naomi Danis is an editor emerita of Lilith and the author of many popular children’s books, most recently Bye, Car.