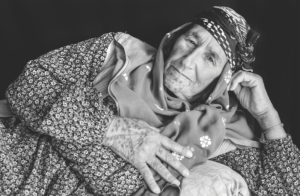 Safi Haso, who believes she is about 70 years old, from Girik village of Kobani. Haso, has both facial and body tattoos, was photographed at a refugee camp in Suruc, Turkey after being displaced by the fighters of the Islamic State (ISIS) in 2014. “We are perhaps the last generation that has tattoos,” she says. “All Kurdish women had them.
Photography by Jodi Hilton

“I can tell you a story,” said Rabbi Tsipporah “Tsipi” Gabbai.

Nearly a hundred years ago, Ḥaninah walked through the market in Boujad, a small city at the feet of the Atlas Mountains. At fifteen years old, she was pretty, kind, and especially loved by her brother, David. She also caught the eye of a Muslim man in the market, who admired her beauty. She repeatedly refused his propositions. A few days later, on a subsequent visit to the market, a car pulled up beside Ḥaninah. A man grabbed her and pulled her inside. Before anyone could help her, the car disappeared into the distance.

Boujad in the earlier half of the 20th century was home to 30,000 Jews, Muslims, and a few Christians; it was unique in that it did not have a melaḥ, the segregated Jewish quarter that was a fixture in most Moroccan cities. People of all faiths and tribes lived in Boujad shoulder-to-shoulder. Just as different-faith communities living side by side was ordinary, so were frequent kidnappings of Jewish women by Muslim men—including Rabbi Gabai’s aunt, Ḥaninah.

“Her brother David was devastated. He spent eight years looking for her. He thought he could find her, because she couldn’t have children—so maybe that would make the guy more willing to let her go,” said Rabbi Gabai. Eight years after Ḥaninah’s kidnapping, David had not only become a rabbi, but a businessman as well. After years of searching for her, he paid a Muslim man to reunite with Ḥaninah. They met in a cemetery after dark. When Ḥaninah lifted her burqah, Rabbi David could see that she was crying. He could also see that her face was covered in tattoos. “One of the first things they did to Jewish women when they took them in Morocco, even if they wanted to become Muslims, they tattooed their faces, like to say ‘For life, you are not a Jew anymore.’” Because Ḥaninah was unable to have children, her captors begrudgingly released her to Rabbi David. Ḥaninah returned home around the time that Rabbi Gabai’s mother was born.

“Some of my early memories, I can remember her screaming. She was trying to burn off the tattoos with acid. I remember it as a little girl because it was, like, supposed to be a shame. If someone were to take a picture of her, back then, they would say ‘Oh, this is a Jewish woman.’ But they wouldn’t know her story.”

French men, Jewish and gentile, traipsed through the Maghreb in the early 20th century, photographing Orientalized subjects. A century later, their minimally-labeled photos remain enshrined in museums, the voices of women and girls, including tattooed ones, insufficiently captured by them. Women like Ḥaninah were being shot, but not with a gun.

My interest in tattooing and piercing in Jewish cultures originates in my childhood. My biggest takeaway from my fleeting interactions with my Jewish family’s religious practice was that the body re-enters the earth the way it “came out” of it, precluding tattoos and—so I thought—piercings. As I connected with Judaism, my desire to understand halakhah surrounding adornment increased. I became interested in the communities that seemed to fuse both of my family’s cultures, my father’s side being Muslim: Jews from South, Central, and West Asia; North Africa; and the Balkans.

I was drawn to the digital archives of the Israel Museum and the Jewish Museum. There I found pictures of “tattooed” women, nose rings from South Asia, and heavy earrings from Morocco and Afghanistan, among other beautifully preserved objects that comprise global Jewish visual cultures. I also looked into writing by Walter Fischel, an Ashkenazi visitor to 1940s Jewish Kurdistan:

I had never seen a more picturesque or impressive mourning assembly. Such Jews! Men virile and wild-looking; women wearing embroidered turbans, earrings, bracelets, even nose rings, and with symbols tattooed into their faces—our brethren and sisters!

I was not only frustrated by Fischel’s failure to consult the Kurdish women themselves, but inconsistencies in the museums’ online labels. Any picture of a woman with facial markings did not mention whether she was Jewish. A woman wearing earrings that Rabbi Gabai called khoras k’bash (rams’ horns) was not marked as Jewish, but a similar style of earring featured in a reconstruction of the wedding ensemble of urban Jewish brides in Morocco.

I didn’t have access to the writings of Jean Besancenot, the French man who had taken all of the pictures in the Israel Museum’s archives. I wondered whether he, unlike Fischel, had taken the time to listen to women’s explanations about their clothing and customs. On other sites mentioning the photographer, he was described as an essential piece of historical understanding of Moroccan Jewish traditions.

The word used for the black markings seen on the skin of women is “harqus,” spelled by French-speakers as “harkous.” Rabbi Gabai told me that, to her knowledge, Jews in the Maghreb did not use it. Rabbi Gabai is the first female Moroccan rabbi. She is a spiritual leader, storyteller, and community activist, allying herself closely with issues of LGBT+ rights. I was honored that she was sharing with me.

“I have no idea,” said Rabbi Gabai. “I know, in North Africa, Morocco, Tunisia, Algeria, I know for sure that it was very forbidden to have tattoos. Not even for decorations—like when you did henna on the forehead for henna decorations, maybe, but eh, so I don’t know.” Rabbi Gabai also told me that, while nose rings were rarely, if ever, worn by Moroccan Jewish women, they have never been forbidden by Jewish law. “Halakhically, you can see the example of Eli’ezer, the servant of Avraham, who is given earrings to find a wife for Yitzhak, in the whole Levant, or for Jacob who gives it to Rachel.”

Rabbi Gabai compared the piercing of her daughters’ ears at a young age to a b’rit millah. “We are connecting,” she explained, “everyone to our history—to our ancestor, to Judaism, all that.” I smiled at the thought of my ears—pierced at Claire’s as my dad held back tears—as a type of b’rit, and ancestral connection with women who came before me. The earrings were not a gash, and the tattooing—whether subdermal or under the skin should not have excluded a Jewish woman from her community.

“It was never her fault,” affirmed Rabbi Gabai of her aunt Ḥaninah’s kidnapping. “She was a child. Living in these countries, there was some good, and some bad. Some good people, some bad people.”

Seeking more clarity about harqus and tattooing, I came across the blog “Eshkol Hakofer” written by Dr. Noam Sienna. While no longer active, it is a blog about Jewish henna and other body markings in Jewish (and sometimes non-Jewish) communities. Sienna is the author of A Rainbow Thread, an anthology about LGBTQ+ Jews in history. I found this quote from his article about harqus, and another about body art in the Maghreb and Kurdistan (also known as Ezidistan; Shabakistan; Assyria; Mesopotamia):

But how can we tell if a given design is done in ḥarqus or a tattoo? While there are plenty of beautiful patterns, there is almost no way of knowing for sure whether it is a tattoo… Except in one circumstance, of course: photographs of Jews! (2015) While Kurdish Jews did not tattoo themselves, they did use indigo (nila) and turmeric (zaira) to create temporary body art, especially for ceremonial occasions such as a child’s birth (Brauer 1947: 137), another custom also practiced by other Jewish communities in Central and South Asia. (2014)

“People like Fischel are seeing a few things,” Sienna explained via video chat. “They’re seeing body decorations, but the only body decorations they’re familiar with are tattooing. They don’t bother to, or can’t, ask the people they’re observing. So intentionally and unintentionally, they’re traveling to these places and creating and working within narratives shaped by Orientalism. For these visitors in these regions—it may seem logical to conflate all types of body decoration. But they’re not interchangeable.” What had piqued my interest was that Fischel had specifically referred to tattoos into the skin of Jewish women. Now I knew they were not subdermal.

Mirushe Zylali is a writer and artist. She anticipates her Bachelor of Arts in Religion and Studio Art from Mount Holyoke College in spring 2021. A version of this piece has appeared in New Voices, the online Jewish student magazine.