Kit McDonough is a Brooklyn-based Jewish tattoo artist who embraces a wide range of themes and seeks to help her clientele celebrate their bodies and their memories through art. She talked to Lilith’s Arielle Silver-Willner about her work and how tattoos are a part of her Jewish identity.

So, how does a “Nice Jewish Girl” get into tattooing?

In college, I didn’t have the money to spend on tattoos. At that point the few I did have were all drawings I made and had someone else execute. There was one night where I was drawing and I thought, “You’re really good at drawing…there’s no way you couldn’t figure out how to tattoo yourself.” And sure enough, two hours later I had given myself my first hand poke (with a sewing needle, thread, and India Ink).

I spent a good amount of time (maybe a year or more) practicing on myself before moving on to others and the rest is history. It’s worth it to mention at that point in my life I had never felt more separate from my own body. I am so glad I gave myself permission to try it.

Should I be concerned that having a tattoo makes me less Jewish?

In my mind, my two identities cannot be separated—I am Jewish and I have tattoos, therefore my tattoos are Jewish. They are lawful. They represent my existence as a “modern Jew.”

I wasn’t raised with any particular emphasis on religion. It wasn’t until around college that I started interacting with my Jewish heritage. I learned about my family’s history, I took classes about Judaism—I felt an urgency to learn about it because I had “missed out” on all of this in my childhood.

Now I feel more connected to Judaism than I ever did as a child—my practice evolved to embrace this other identity that was in me all along. I have found community in other tattooed/tattooer Jews. New York is full of them. 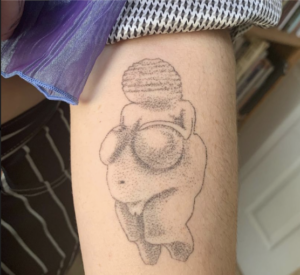 I’ve heard that you have an anecdote about discussing tattoos with an Orthodox woman at a gynecologist appointment…tell me more about that!

I go to a doctor with a predominantly Orthodox Jewish clientele and mostly Jewish nurses and receptionists—they actually refer to me as “the one with all the tattoos.” I was in the exam room for a wellness checkup and the nurse started asking me about my tattoos. “I really want one, but I’m so afraid,” she told me. I asked her why and she said, “Well, you know it’s forbidden in my religion?” I love this part because it’s always so fun to reveal to people that I’m Jewish. She was totally shocked! I told her I’m familiar with this part of Jewish law; I know that the addition of tattoos is thought to be insulting to God’s handiwork, but what if we reframed it?

My tattoos are a map of my life—they’re some of my favorite images that have resonated with me—they’re friendships and memories etched into my skin. I am more myself now than I was without a single tattoo, and I think that is inherently God-loving. To love myself so wholly is to love God the same way. Before she left the exam room, the nurse told me she would think about it more and that her idea was to get something between her shoulder blades.

Giving a tattoo seems like quite an intimate experience—what is it like to leave a permanent mark on someone’s body, especially when that person is a stranger?

I really started tattooing to tattoo myself. So, my curation of designs felt (still feels, actually)  personal. When people come to get tattoos from me I’m always fascinated by which designs stand out to them. Nothing is more mind blowing than two people from completely different lives somehow both feeling an emotional connection to the same image—three, if you count me. We are innately tied to one another, it is magic. 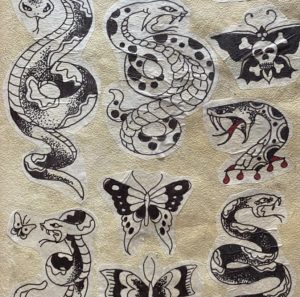 What kind of tattoo do you think Lilith would have wanted?

I think she would have had a fully ornamented full body snake tattoo (or perhaps a few interlocking snakes). The eternally misunderstood serpent is the symbol of evil but how unfair is that? I think Lilith might identify with that legacy and want to subvert the reputation of the snake by having it tattooed on her forever. She would be the type.