This is not news to you: Lives squandered in the fighting in Ukraine, women attacked in the streets of Tehran, Indigenous people in Western Canada knifed to death on their own land. Floods in Florida and the Carolinas, and then unimagined droughts—the Mississippi River dried up and closed to all boats a few weeks ago. And all this while the day-to-day political situation in the U.S. is more fraught than it was yesterday. Antisemitism in high places. And low places. Stupidity and venality and mendacity and unstable people running the zoo (h/t Dr. Seuss). We respond with anger and action to the awful injustices, which Include but are not limited to the evil attempts to control women by denying reproductive options and our basic, fundamental right to control our own bodies. 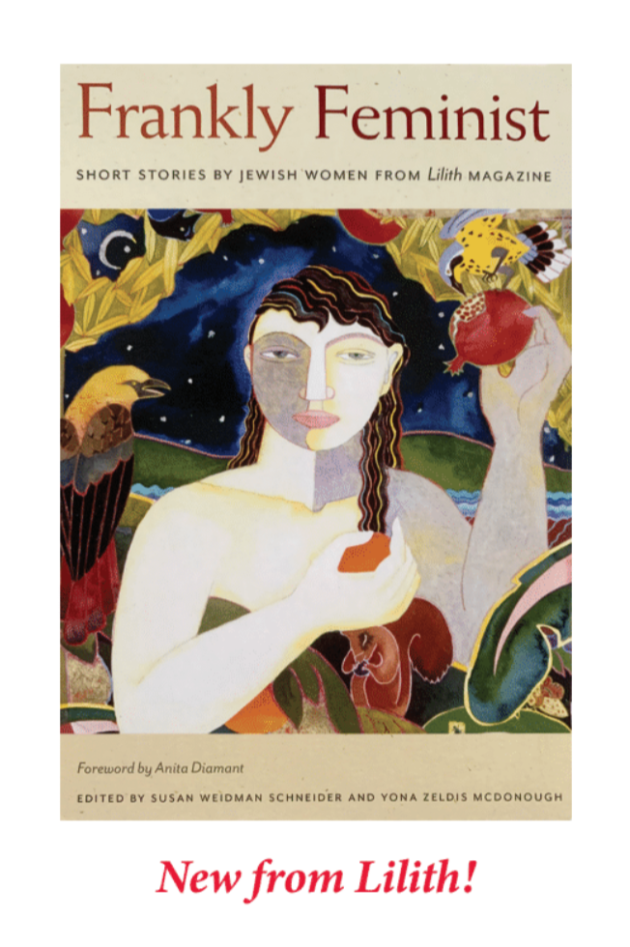 So are we also entitled to read a book, play Wordle, have a long conversation on the phone with a friend? What pleasures can we experience if Rome (read: everywhere) is burning? One undeniable source of joy this season is that Lilith has a new book out. I hope you’ll join Lilith staff, supporters, editors and writers in celebrating the publication of Frankly Feminist: Short Stories by Jewish Women from Lilith Magazine, bringing together 44 stories out of the hundreds Lilith has published in the magazine over the years. Unusual for a collection, Lilith fiction editor Yona Zeldis McDonough and I grouped the stories around the themes they reveal.

This first-ever anthology from Lilith is a unique amalgam of fine writing and activism that comes right out of Jewish women’s lives today: transgressive loves, deepening connections, political turmoil, abortion, fear of loss, struggles with fertility, with body and soul, with finding community, with decoding family life. These fictions offer variegated cultures, contexts and points of view: Persian Jews; a Biblical matriarch; an Ethiopian mother in modern Israel; suburban American teens; Eastern European academics; a sexual questioner; a Jew by choice; a new immigrant escaping her Lower East Side sweatshop; a Black Jewish marcher for justice; a toddler’s mother hiding out in Vichy France; and more.

Some of these 44 authors are bestsellers; others are emerging talents with ages ranging from their 20s to their 80s. The characters they create reveal themselves by choices of pastimes and partners; by their causes and their passions, by what they
say and what they signal. And the voices in Frankly Feminist have plenty to say about how we live now. They are neither meek nor decorous. They speak with anger and humor, tenderness and rue, self-recrimination and howls of victory.

Several of the stories, like the writing you’ll encounter in this issue of Lilith, deal with mysteries, or yearnings that are thwarted, and what happens after. Secrets are things hidden from us, closing us in, but their reveal opens up such wide new terrain; where there’s a lock, there’s likely a keyhole. Even great puzzles, great mysteries, can in time allow themselves to be unraveled.

A revelation doesn’t fix what was wrong, or erase the experience of having been kept away from truths, but being able to go through the locked doors enables our greater understanding, and perhaps some healing too. As this issue of Lilith took shape, I thought about what the secret-keepers gain from locking those doors: protecting themselves, sometimes protecting others, avoiding blame or shame, staving off hurts, attempting damage control. And what is gained when we unravel secrets? Some relief at having our intuitions or suspicions confirmed, knotty confusions loosened, puzzle pieces linked together, clouded vision becoming a little clearer. Much like the satisfaction from reading a well-told short story.

And yet… unlocking these doors doesn’t necessarily lead to a better, sunnier world. Great happiness is not promised with the reveal, only a modicum of understanding. Then, while I was having these thoughts, Rabbi Delphine Horvilleur, a writer and spiritual leader in Paris. She told the Times reporter profiling her, “Resilience only comes from acknowledging that what is broken won’t be repaired. It’s always about knowing how you are going to bring together the shattered pieces of your life to create a stronger story for times of despair.”

May 5783 bring you, and all of us, greater understanding and strong stories.