People who receive a spiritual calling at a young age often say they hear messages or have clairvoyance, or even come from a long line of psychics. My own metaphysical journey was not peppered with voices or visions. In fact, it was more like a series of epic failures.

At one point in my childhood I acquired a Tarot deck. I read the accompanying little white guidebook, but the cards felt cryptic and distant. I had no idea how to use them, and had no access to the Internet or the excellent Tarot books available today, such as Tarot for Yourself by Mary K. Greer or Barbara Moore’s book. I placed the cards in a drawer and abandoned my Tarot dream.

Then, one of my most disappointing teenage moments was a failed journey into witchcraft. My heart raced as I turned the pages of a library book on Wicca, looking for secrets on how to cast spells and practice magic. As I read I was shocked to learn that spells and magic were not just tools for receiving messages—they were spiritual tools rooted in Paganism, a deep and ancient earth-based religion.

Religion was something I knew about: I was Jewish on both sides of my family and I had always felt a strong connection to Judaism. We belonged to a small reform synagogue in a predominantly Christian suburb in Ontario and I had an active Jewish life in our community and at home. When I thought about the years spent studying and deepening my connection to my own religion—including becoming a bat mitzvah, which at the time was still a recent accomplishment—the idea of taking on a new religion felt overwhelming.

I felt drawn to the earth-based elements of Wicca and witchery; I was in love with the idea of goddesses and a religion centered on women’s experiences and spirituality, but I could not even imagine how to navigate these two religions that seemed so different. My fantasy of casting spells with my own coven went up in smoke as I placed the book back on its shelf.

The fantasy, as it turns out, would return again several decades later. Although I never lost touch with Judaism over the years and experimented with different denominations and expressions of observance, in my thirties I began to feel like something was missing. Like many of us, I did plenty of wrestling to find a place for myself in the Jewish community. I advocated for the inclusion of women, queer and trans people, as well as interfaith families in Judaism. I raised issues about intersectionality, colonialism, and anti-racism on the bimah. Socially and politically I met like-minded people and found a home in a local Jewish Renewal community, but spiritually I was still fading. I became increasingly frustrated with the patriarchy and ethnocentrism in our prayers, such as the recurring metaphor of God as King or prayers that call for peace for all of Israel instead of peace for all nations. While I recognize that some modern prayerbooks have taken the liberty to adopt new interpretations of these texts, being a queer woman married to a non-Jewish genderqueer person, many of our foundational prayers and liturgy increasingly left me uninspired.

And then, something incredible and unexpected happened: I turned 40. Well ok, I did expect that would happen. But what I did not expect is that turning 40 would spark an opening to another dimension of spirituality.

In Judaism, turning 40 years old marks a significant spiritual milestone. The number 40 is often associated with a transition between worlds, and the Talmud teaches that age 40 is when a person progresses to another level of wisdom, known as binah or “insight.” Traditionally this has been interpreted as the age when a person is ready to study Kabbalah, Jewish mysticism.

I hadn’t been interested in anything mystical since my teenage years, until exactly one week after my 40th birthday when my partner gifted me a deck of Tarot cards.

I grew fascinated with Tarot and learned about its origins in Egypt as possibly a card game, eventually making its way to Europe in the hands of the Romani people who were the first to use Tarot for fortune telling and divination.

I was thrilled to learn that the images in the traditional Rider-Waite deck published in 1910, were created by Pamela Coleman Smith, a psychic artist and speculated queer woman of color. Arguably the most popular deck used today, the Rider-Waite-Smith Tarot deck was designed by Arthur Edward Waite, and both Waite and Smith were members of the Order of the Golden Dawn, a secret society of mystics.

The mystical roots of Tarot surprised me even further, when I learned that Tarot holds a number of mysterious connections to Judaism. For example, when looking at some of the cards you can see Jewish images, such as the four Hebrew letters of G-d’s name on Temperance and The Wheel of Fortune, or the word “TORA” on a scroll in the lap of The High Priestess. 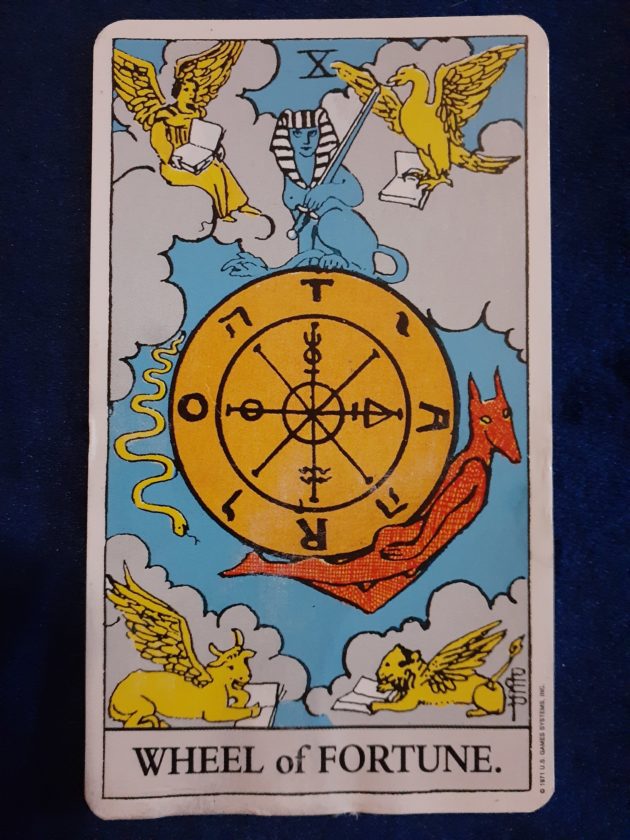 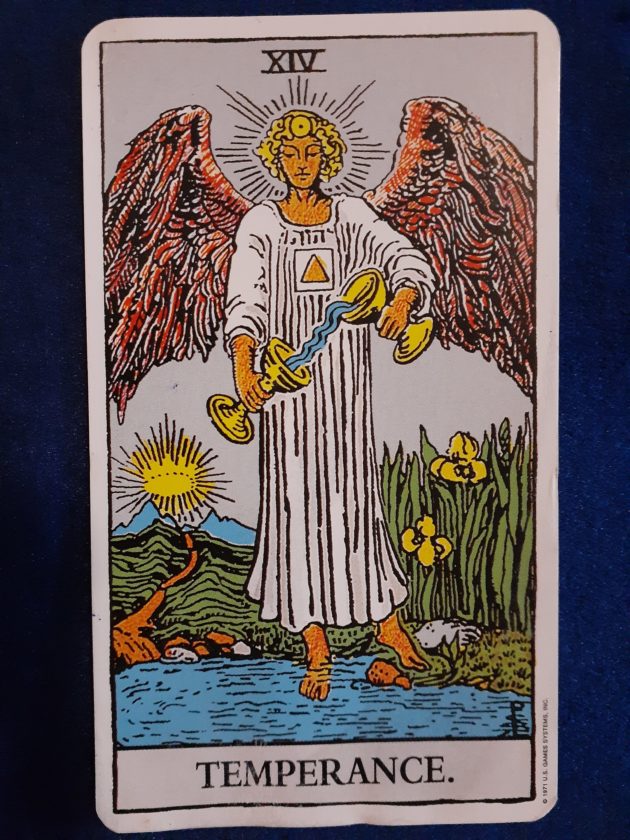 Rachel Pollack, one of the world’s most prominent contemporary authorities on Tarot, and also a transgender Jewish woman, writes about the many parallels between Tarot and Kabbalah. Pollack notes the alignment of the 22 Hebrew letters with the 22 cards of the Major Arcana, and the four suits of the Minor Arcana with the Four Worlds of Creation. Some argue that Kabbalists were secretly behind the meanings of the cards, although there is no historical evidence nor any mention of Tarot in the Kabbalistic literature. Despite the longstanding mystery, Tarot still holds a number of Kabbalistic significances.

In the Rider-Waite-Smith deck, the Ten of Pentacles depicts ten circles with pentagrams in the shape of the Kabbalistic Tree of Life. The ten cards in each suit are further linked to the ten Sefirot in the Tree of Life, also described by gay activist and Jewish Tarot reader, Mark Horn, in his book Tarot and the Gates of Light, where he demonstrates how Tarot can be used as a tool for counting the Omer, helping us to reach new spiritual heights.

I spent the next several months studying, practicing, and then finally doing readings, first for myself and then for anyone who was willing. I brought my cards to work, to parties, to virtually every occasion. What I loved about Tarot was how it offered a window of insight into whatever problem or issue was on your mind. I witnessed people find a sense of hope in times of stress or something empowering to focus on when feeling lost. What mystified me was how Tarot worked–spiritually. The Romani people used it for divination as part of their spiritual practice, so who should I pray to when channeling insights using Tarot? Does it require divine communication with a particular deity or spiritual entity? Why do the insights that come to mind with Tarot always seem to resonate with people? In order to develop my skills at reading Tarot, I wanted to find out how it worked on a deeper level. Although I could not find a consistent answer as to why Tarot reading worked, I consistently learned that what made Tarot reading work was intuition.

With a desperate desire to improve my readings, I ventured out to a Tarot meetup one bright Shabbos morning. “What can I do to deepen my intuition?” I asked a table of Tarot enthusiasts. Someone suggested placing a crystal on my third eye while meditating. “My third eye?” I asked, touching my forehead, and then replying, “Oh! You mean the place for my head tefillin?”

Shortly afterwards, I began meditation for the first time in my life. Sometimes wearing tallit and tefillin, or holding crystals, or neither. I felt a deeper sense of connection to my physical self and to the world around me. I felt glimpses of Divine Presence in ways I did not feel when davening.

I began transitioning between worlds.

Because I yearned to discuss these experiences with others, it was not long before I found myself facing the portal to witchcraft again. Now, as an adult, I was determined to really find out what this witchy world might have to offer a magic newcomer like me. I found a local class taught by a queer witch and priestess, and for four weeks we explored what it meant to create a sacred space together. I learned about calling in the elements, casting a circle and building altars. We went into trance, read each other’s Tarot cards, and shared stories about close relationships in our lives. For the first time I felt what it was like to be in a sacred space with only women and nonbinary people, most of whom were queer.

Our collective attuning to the Indigenous and colonized land we were on invited a socially just spiritual consciousness into our ritual space. Guided by the updated Principles of Unity in the Reclaiming tradition of modern witchcraft, which commits to anti-racism and centering voices of Black, Indigenous, People of Color, the witchy circles I encountered had more of an explicit emphasis on anti-oppression than I had ever experienced in Jewish religious spaces.

While this magical practice resonated with me deeply on multiple levels, I couldn’t help but feel like an outsider in someone else’s traditions. Deep inside, at my core, I felt Jewish. I knew that bringing myself fully into this curious witchy landscape meant bringing my Judaism with me. But how?

I launched into my own program of study to find the intersections between Judaism and magic. It began with a dive into scholarly literature on Jewish Goddess religion by authors such as Melissa Raphael, and then expanded into learning about the Pagan roots of Judaism with books such as Jennifer Hunter’s Magickal Judaism. I learned about modern Jewish witches who were combining Jewish and Pagan traditions, including Pam Grossman who hosts the Witch Wave podcast, or Starhawk who famously revolutionized modern witchcraft.

Thanks to the Internet and increasing availability of online learning, I was able to find Jewish schools with classes that spoke to my interests, including Kohenet Hebrew Priestess Institute and the Institute for Jewish Spirituality. I took courses on topics such as dreamwork as spiritual practice, ritual design, and mindfulness and meditation, all taught from a Jewish perspective! Through these connections I began to meet other self-identified Jewitches and I finally started to feel like I was finding my tribe.

Tarot became my entry point into a new-found spirituality, and since then my spiritual path has felt like a Choose Your Own Adventure novel. I’ve been following the threads from one spiritual pursuit to another, including learning about astrology and lunar magic through the works of witchy-type women with Jewish ancestry, such as Chani Nicholas and Sarah Faith Gottesdiener. I’ve been creating Jewitchy rituals to share with my full moon witchy crew, and I even started my own Jewitchy Rosh Chodesh circle that meets every new moon. I’ve learned that my own spiritual identity is ever-shifting, and having kindred spiritual friendships and communities is key.

Every person has their own spiritual path to travel, and I encourage you to explore and follow what interests you. For me, it all started with a deck of Tarot cards that led to a world of Jewitchery.

Azra Silverstein is a Queer Jewish Tarot Reader living in Vancouver, BC on the unceeded homelands of the Musqueam, Squamish and Tsleil-Waututh Peoples. To get in touch, visit www.azrasilverstein.com.