The messiness of motherhood, indeed of a woman’s whole life, is something novelist Elisa Albert has been thinking and writing about for years. Her much anticipated new novel joins a conversation that Albert herself has had a hand in shaping. After Birth hit bookshelves in 2015 and made waves by delving into the loneliness of early motherhood, well before a flood of new memoirs and novels in its wake tackled maternal ambivalence.

Now, in its story of a desperate-to- conceive musician, Human Blues [Avid Reader Press, $28.00] holds up a mirror to the equal loneliness of trying to have kids, especially when you are refusing technologically-assisted reproduction, as everyone around you seems to be doing with great success.

This is not a story that is frequently told, Albert told me in a Zoom interview this Spring–falling somewhere in between the “desperate for a baby so I’ll try anything” story, leading to perhaps years of expensive fertility treatments, and the “don’t want a baby at all” story. “I just didn’t see any representation of the deep ambivalence and the emotional and intellectual honesty to question the system,” she said.

Human Blues’ unforgettable protagonist, folk-rock singer Aviva Rosner, very much wants a baby. After three years of trying, however, all she has to show for it is a clean diet, a growing frustration with her woman parts, an Amy Winehouse obsession, and an album on the verge of genuine artistic success. The problem is this: Aviva wants her baby the regular way, through sexual congress with her “manny- man,” preferably (who are we kidding, definitely) of the highly satisfying variety. Over the course of nine menstrual cycles, Human Blues charts Aviva’s odyssey as she alternatively tours to promote her album and tries to get pregnant, and as she comes to term (pun very much intended) with her own specific version of womanhood.

Aviva is the type who suspects doctors of rapacious greed and willful ignorance of women’s holistic health (not entirely wrongly), but happily listens to any number of alternative medicine practitioners and wellness gurus, including some who give her drugs of various degrees of legality. The road to baby is paved with compromises, yet Aviva, for all her desperation, is not quite desperate enough to reconcile herself to all of them. How do we talk about a woman who will not commit to being simply one thing, but demands instead to contain multitudes? And especially, how do we talk about women for whom motherhood is desirable, but not something for which they are willing to sacrifice their beliefs, sanity, and bodily integrity?

Aviva has been “traumatized by the medical—industrial complex—but she’s totally open to drugs, every acupuncturist, every Maya abdominal therapist, and, of course, that begs the question of ok, you’re choosing to leave one system behind and you’re plugging into another,” Albert told me, Aviva also seeks comfort from extramarital flirtation, from therapy (she calls her shrink “the Rabbi”) from shopping, and from singing. “Ultimately the hard answer to that quandary… is that you’re not going to be able to plug in to any one system or thing or theory and no one thing is going to fix you,” says Albert. “We all have to make very careful choices about how we live in our own bodies and proceed with caution, whether it’s medical science or shamanism because there’s abuses everywhere.”

Still, the main system Aviva struggles with co-opting is motherhood itself. “She is a very self-destructive person and she’s been able to sort of channel that in the service of her art,” Albert says. “I think she’s struggling with how to grow up herself, and for some of us child-bearing and rearing is a kind of express train to self-actualization. Not being able to conceive challenges her confidence and her sense of self. It should be such a simple, easy thing: anyone can do it. It doesn’t take great talent or intellect, so to find that she doesn’t have that makes her all the more urgently needing her identity as a creative person.”

For all her struggles, Aviva Rosner is one of the most actualized characters you’ll ever meet on the page: she’s rash, she’s bold, she’s annoying, she’s sympathetic, and unflinchingly, uncomfortably honest, even when it comes to (mild spoiler here) making the decision to quit trying so hard, to give birth to more art instead of a small miniature of herself.

“I do think she would have been a great mother,” Albert says, “and in fact, one of the ideas that I was hoping to put 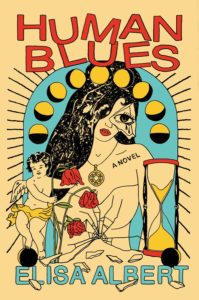 across with her is that for some people, letting a child not be born or conceived is actually one of the greatest self-sacrificing maternal things.”

After I spoke with Albert, the conversation about the reproductive process has taken a radical shift, as Roe vs. Wade, the landmark decision which legalized abortions in the U.S., was overturned. One of the many casualties of the decision is expected to be, ironically, IVF, which Aviva is so turned off by, a method of technologically assisted reproduction that as of 2016 accounted for 75,000 births, 2% of the national total. IVF depends on the manipulation of embryos, and in some cases involves discarding them, whether because they are genetically compromised, or to implant a safe number of them.

Giving embryos personhood, as some states are expected to do, will open an already ethically complicated issue to fur-ther legal complication, and many doctors expect it will have a chilling effect on assisted reproduction, not to mention dashing many parents’ hopes of children.

As feminists took to the streets to protest the SCOTUS decision, I emailed again with Albert who described the “specter” of a post-Roe world as “hellish.”

“I personally believe choice is sacrosanct, and am proud of the Jewish stance: that the vessel’s life and wellbeing always supersedes that of a cell-cluster,” she wrote. “And at the same time,” she added, “I am appalled, as ever, by how insanely little most people actually understand about how the female reproductive system works, and how to live as safely as possible alongside and within one.” At a key point in the novel, Aviva consults with a woman who is an all-purpose doula: birth, abortion, infertility and more, and their conversation—as well as this character’s existence—might have a kernel of a thesis in it: that all these processes in which we choose or don’t chose to have kids are connected, and thanks to patriarchy, we have become disconnected from all of them.

In between her consultations with doctors both traditional and not, Aviva is worried about a great many things when it comes to IVF: from the supposed rape of the female egg, who is forced to accept a scrubbed and sanitized sperm rather than choosing for herself, to the immense barriers to access in an industry that openly talks about babies as the ‘take-home’ product. Some of Aviva’s concerns echo those of her author: “We live in one of the only countries in the world that has no ethical regulations or profit caps on these technologies, and for anyone to be getting rich in this way is psychotic,” says Albert. “The idea of control is something that came up again and again and again for me in the writing of this book: what do we control, what can we control and what do we actually want to control.”

These ethical quandaries around IVF are a small subset of the broader injustices that After Birth also touches on, the systems that make it impossible for women to balance their own fulfillment, their ideologies and desires, and their biological imperatives in our society—in short, the ability to live a full human life. Human Blues offers us a distinctly feminist story, one that embraces female ambition in all things: career, family, friendships, sex. More importantly, it doesn’t shy away from the functions of the female body, the mood swings, the insecurities and sacrifices, the blood and bloat and discharge. Albert has been working on Human Blues for seven years, and thinking about these issues even longer, but as a woman’s right to determine what to do with her own body comes under radical attack, this novel will pack an extra punch.

It remains to be seen what will happen to reproduction technology and to the women desperate to conceive with the overthrow of Roe, but the main question of Human Blues remains alive: why are women’s bodies so easy to abuse, whether you are trying to help them or control them? Why are society, and medicine, still so ignorant about how a woman’s body works, and why do they lack the will to find out? Albert doesn’t have the answers, but through Aviva she asks the questions, and hopes more women join her, without judgment or shame, no matter what they choose to do with their own bodies. “If this novel and this character can serve as a jumping off point for these conversations to be had more, then I’ll be a happy novelist,” says Albert.

Ayelet Haimson Lushkov is an Associate Professor of Classics at UT-Austin, and the mother of two children, conceived in the conventional way.