In early May of 2014, David’s name popped up on my caller ID. I was late to catch a train, but I picked it up. Cancer had reduced his sonorous tenor to a whisper that was hard to hear. He asked me if I was sitting down. “I am now,” I said, and took a seat on my bed. Kim had given him a kit from 23andMe, the DNA-testing company, for his birthday. Five months later, he had big news.

“I found my birth mother,” he said, his excitement uncontainable. “Her name is Margaret Erle Katz, and she lives forty-five minutes from you.” He had already plotted the distance between our addresses on Google Maps. “You have to meet her,” he said. It turned out that his birth parents had married, and he had three siblings. He’d spoken with the youngest, Cheri, a woman he embraced as his “baby sister.” Like him, she was also a professional vocalist: she was an opera singer in Berlin. He’d watched her performances on YouTube, and she was his female clone. If only, he said, he’d known sooner.

“Margaret didn’t want to give me up,” he told me. I heard David’s voice catch. “She’s loved me my whole life.” I began to realize that the story of how David and Margaret lost and then found each other—and of the political, scientific, cultural, and economic forces that caused and then enforced their separation—was part of a far larger story. Their story wasn’t an aberration; it was representative of a much larger reproductive and human-rights story. It encompassed generations of American women and their sons and daughters, many of whom were exploited for profit and for science. It was an important chapter of American social and cultural history hiding in plain sight, undergirded by a soothing narrative that had repackaged the reality of what it meant to adopt, what it meant to be adopted, and what it meant to surrender a baby you gave birth to.

Margaret Erle, I would later learn, was one of more than 3 million mostly unmarried young women who conceived during the decades after World War II and found themselves funneled into an often-coercive system they could neither understand nor resist. They endured their pregnancies in secret, sometimes with distant relatives, or as servants to strangers. Many were shipped far from their families to maternity homes that dotted cities and towns in nearly every state. They gave birth alone, and were then pressured or forced to surrender their newborns to strangers. Nobody told many of these young mothers that they would never see or hear about their children again.

This unheralded surge in births out of wedlock came just as battles over contraception and abortion were beginning to dominate the public conversation, and continued until 1973, the year Roe v. Wade made abortion legal nationwide. The silence surrounding this massive experiment in social engineering is hardly surprising. In the 1950s and ’60s, America embarked on an unprecedented frenzy of homemaking and family-building. Images from the baby boom portrayed an ideal (white) bread-winning father and a beautiful (white) mother who stayed home with several children, all living happily in a pretty new suburb.

In fact, there were lots of families living outside that tidy picture. Millions of couples were unable to conceive and did not yet have the benefit of advanced reproductive medicine. The need to adopt carried as much shame as becoming inconveniently pregnant. A woman who had sex out of wedlock and one who was infertile in this era of relentless fecundity had both failed some new test of social acceptability. The answers to the questions they raised were silence and secrecy.

Many of the same demographic and social forces that had launched the baby boom propelled the explosion in unwanted pregnancies and adoptions. Birth rates had dropped during the Depression and the war, but now the prosperous postwar economy, fueled by generous government loans for college and new suburban homes, catapulted millions of white Americans into the growing middle class. In previous generations, young, unwed couples who found themselves with unexpected pregnancies married quickly and kept their babies. But the shifting cultural landscape had made shotgun weddings for teenagers much less appealing, at least to rule-following parents who had withstood the deprivations of the Depression and World War II, and now had aspirations to achieve. These surprise pregnancies were an obstacle to a better life that needed to “go away.”

For the millions of couples who could not conceive and were longing to join the baby boom, the plight of those women was an opportunity, the ideal solution to a painful problem. The babies were desirable; the mothers were not. The adoption business comprised an array of individuals and institutions, from researchers whose pseudoscience justified the advantages of unproven practices in child assessment, to the social workers addressing family crises, to adoption agencies that frequently benefited economically from each woman they persuaded to relinquish a child.

In the rare cases where it was publicly discussed, the accepted narrative was that adoption was in the best interests of everyone involved. It gave birth mothers the chance to escape the stigma of unwed motherhood, spared their children the shame of illegitimacy, and offered infertile married couples the chance to become parents. The one thing that few, it seemed, thought to consider was the lifelong emotional impact on women who were hidden away in shame during pregnancy, expected to lie about it everafter, and then told to put their babies out of their minds. Few invested much thought in the feelings of the adoptees who were brought up to think their birth parents hadn’t wanted them, and that—regardless of how cherished they were—they were their adoptive parents’ “second choice” to biological offspring.

Family members, social workers, obstetricians, agency officials, clergy, and lawyers all promised that adoption worked out for everyone “for the better.” Adoptees would blend seamlessly into their new families, the theory went, and if they wanted to know about their biological origins one day, they could “look” when they were adults. (Although with families who had wanted and loved them so much, why would they bother?)

As David and millions of other adopted people would come to learn when they turned eighteen, the promise of finding birth parents was largely an illusion. Nearly every state had laws that seal the records that would allow children to find their original identities. The adoption agencies involved in many of these arrangements claimed they had a duty to protect the privacy of the birth mothers, despite having little, if any, evidence that they had either been promised confidentiality or were continuing to insist upon it.

As I dug into archives and interviewed scores of birth mothers and adoptees, I came to understand the dynamics behind these decades of entrenched secrecy. I realized that the way the United States dealt with unplanned babies in the decades after World War II—when abortion was illegal, contraception was forbidden even for married couples, and discussion of sex and reproduction was taboo—revealed a great deal about this country. Again and again, the nation’s powerful religious and political institutions collaborated to control women’s lives and the destinies of babies born out of wedlock. Today it is socially acceptable for women (and men) to raise children on their own. But for many adoptees and their birth mothers, the shame lingers, the skewed principles of the past remain in place—and the conflict about whose rights deserve protection rages on.

For David and Margaret, and for countless others, the miracle of modern genetics smashed open the secrecy created by the politicians of the twentieth century. DNA testing kits made it possible for David and so many others to spit into a vial and locate distant, or not-so-distant, family members, facilitating reunions that seemed unimaginable just a decade before. Through the advocacy of adoption reformers, who argue that access to one’s own original birth certificate is a human and civil right, several states have finally opened their records, turning the random chance of a DNA search into a certainty for people who happened to be born there. This transparency has exposed incalculable emotional costs paid by birth mothers and adoptees alike. Even the joyful reunions are bittersweet, shadowed by the fundamental, unanswerable question:

Why did you give me away? 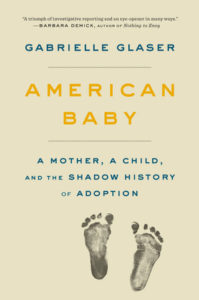 From American Baby: A Mother, a Child, and the Shadow History of Adoption, published by Viking, an imprint of Penguin Publishing Group, a division of Penguin Random House, LLC. Copyright © 2021 by Gabrielle Glaser.