Manhattan wine critic Alice Feiring’s sparkling, poignant new memoir, To Fall in Love, Drink This, (Scribner, $17.00) offers a peek into the author’s very first sip of wine which was when she was still in diapers. Back then, her parents mixed her tipple with seltzer. But that didn’t form her tastes. Every Seder, Sabbath and Jewish holiday, Manischewitz was simply an unpleasant staple at her family’s dinner table.

Years later, at a Passover dinner, the petite but fiery redhead decided she’d had enough. She tried searching for something kosher, but there were few choices. At one point, she even considered making kosher wine herself. She traveled vineyards around the world, sniffing and sipping, and sometimes found gold. Each bottle revealed not only its aroma and ingredients, but also the personalities producing the wine.

The James Beard Award winner has been recognized internationally for her writing about wine. She published 5 acclaimed books including “Natural Wine for the People,” “Naked Wine,” “The Dirty Guide to Wine” and “The Battle for Wine and Love.” 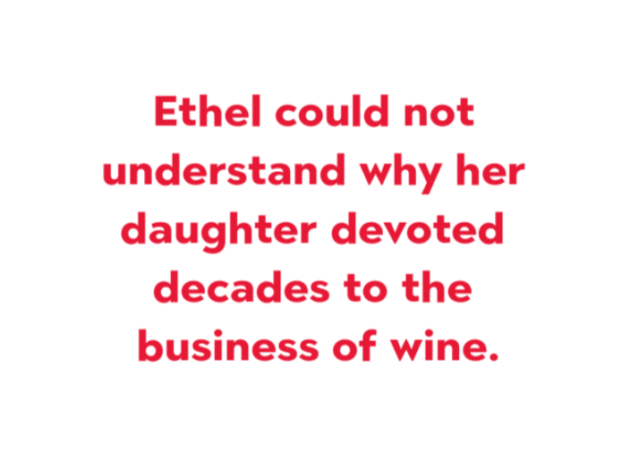 This, however, is her first memoir. And in its pages, her mother looms large. Alice’s mother, an observant Jew, expected her daughter to live a religious life, and to become a doctor—or at least marry one. The problem: the more that Alice globetrotted and drank, especially natural wines from organic agriculture, the clearer became her path.

Ethel could not understand why her daughter devoted decades to the business of wine. “This is what you do for a living? Tell people what to drink?” Alice answered, “I’m writing about this magical, enduring symbol of life, culture, and humanity.”

Every Friday night, Alice brought a new discovery to Sabbath dinner. Ethel agreed to taste it but, invariably, said, “You know what would be good? Mix a little Manischewitz with it.”

When Alice was a kid, Ethel told her “You can grow up to be a teacher,” meaning Alice could stay home and raise kids. These statements, she writes, made her claustrophobic, and physically ill. So it may not be surprising that her adult relationships ended in disappointment.

Feiring chronicles her parents’ divorce, her father’s philandering and death, losing her beloved only brother to cancer, and several long-term romances that went bust.

Through all this, her career was fortifying. She learned how to interpret the contents and quality of wine by sniffing them (having a “sensitive” nose helped) and, of course, tasting them. She exposed technology in the wine industry and producers who make and sell inferior, flawed wine.

Ethel could not understand why her daughter devoted decades to the business of wine. She writes about the great wines, especially natural wines, which are organic, free from additives and Feiring’s favorite.

In her sixties, she re-encountered her brother’s childhood best friend, Peter, “the crush of her youth,” bumping into him in Brooklyn. It had been 40 years since she’d last seen him. Shocked that he remembered her, she asked, “How did you ever recognize me?

“Your hair is still red.”

He was the first Jewish man she’d ever fallen for, and according to a recent New York Times piece, they are still together.

“Why are you obsessed with wine?” she was once asked. She responded, “Drinking the right glass of wine has the power to nurture love.”

Lynn Brown Rosenberg has been published in Salon, The Forward, The Sunday Times of London and NY Jewish Week. She’s the author of MY SEXUAL AWAKENING AT 70, which can be found on Amazon..