Joey Ramona (@joeyramonatattooer) is a Jewish feminist tattoo artist who has gained recognition in recent years through social media and word of mouth. Joey, a self-described “weird Jewish punk guy” based in Toronto, explores Jewish iconography and experiences through designs with a queer/feminist twist. 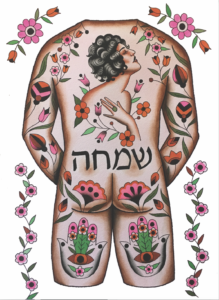 Your name keeps coming up as a go-to Jewish tattoo artist! How did it all start?
I saw the “help wanted” sign in a tattoo shop and I thought, “there’s no way in a million years they would hire an 18 year old punk kid to work the counter at this tattoo shop,” but they did. I spent time in the shop and I thought to myself, “This is what I want to do with my life.” It took me a couple of years of groveling to convince the owner to teach me how to tattoo. But eventually he did—that’s where my journey started.

A lot of your work explicitly features Jewish symbols and iconography; isn’t that a bit paradoxical, given that tattoos are disapproved of in Jewish law?
There are a lot of things that we’re not supposed to do as Jews that we do anyway. But I do think that this one in particular gets a lot of attention, and I understand that there’s a historical context for that. And I’m sensitive to that. One of the reasons I love tattooing so much is, to me, it does feel like a reclamation of something that was done to us that we now have the power to control, take back and use for our liberation. And I also feel like Jews are made in the image of God—I don’t think I would be here with this love of tattooing if I wasn’t supposed to be, especially because Jewish community has become such a big part of my life ever since I started incorporating Judaism into my tattooing. So that aspect of my life has really come about through the ritual of tattooing other Jews.

I started exploring Jewish identity through tattooing as a means to work through my own feelings about being a lonely punk rock Jewish tattooer. I’ve always felt like I didn’t have space in Jewish communities, so when I started making Jewish designs, it was really just a matter of me working through grief and not knowing where I fit and using it as an autobiographical outlet. I didn’t actually think that anyone would care.

Let’s talk about antisemitism. Does it play a role in your work at all? Do you ever worry that displaying your Judaism on your body might put you in danger?
I encountered a lot of antisemitism in the tattoo community and that was isolating. I didn’t know any other Jewish tattooers. So I started making Jewish art that was tattooable as a way of showing who I am right away. Because I never wanted that part of me to be hidden. 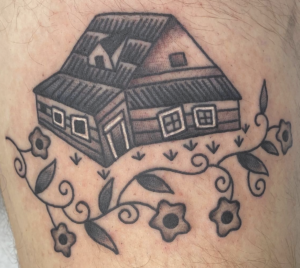 Speaking of Jewish imagery, tell me about some of your latest designs!
I’ve been exploring shtetlach. It gives people a chance to bring back something that we thought we had permanently lost. The shtetl houses that I’ve done are about being able to carry a piece of your history with you that has otherwise been destroyed. There’s something really powerful about having that and taking it with you and knowing it can’t be destroyed again.

I also love to explore unconventional portrayals of Jewish bodies—like women in kippahs and women in positions of power in the community and queer people in positions of power in the community. I have a painting I did of a parent and a child doing the Shabbat services, but the mom is tattooed and butch. I like to challenge and disrupt the idea of what a woman’s role is in our community.

Many of the tattoos you’ve created subvert traditional Jewish narratives—what are your favorite (potentially rebellious) tattoos you’ve given?
I recently tattooed myself with the Yiddish word do-ikayt, which is “hereness.” For me, that’s a really strong political statement, both in the Jewish diaspora and my own body—like, where I am is where I’m valid. And the discourse behind that movement is that my Judaism is real no matter where it exists.

Another favorite is the Yiddish word faygeleh. I’ve tattooed it a couple of times and it is supposed to be a derogatory term for queers. But I love the reclamation of it. I love the fact that it quite literally means little bird because how could that possibly be an insult? I also once tattooed an image of two queer Jewish frum-looking women embracing. I felt like that was really powerful because you never know where queerness is going to show up. 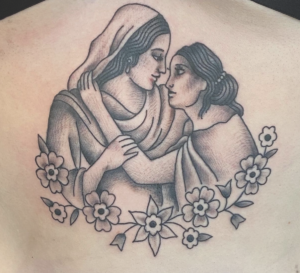 On a more experiential level, how do queerness and feminism interact with your identity as a tattoo artist?
A lot of it is very literal. It means a lot to queer folks who have not had their bodies celebrated the way they should and who don’t see themselves in mainstream culture or tattoo culture as represented or validated. And queerness obviously is tied to feminism because gender should never impact how you’re treated in the world, but it does.

How does it feel to have found a place in the Jewish tattooing community?
It’s gone beyond my wildest dreams. It makes me feel misty just thinking about it because it’s almost surreal to get to a place you never thought you would get, especially as a queer trans Jewish person. I honestly did not think there was ever a place for me. So now that I have other Jews to be in community with who I can see myself in, it truly nourishes my soul.

I really hope to bring that feeling of isolation quite literally out of the closet so that other people who may be feeling how I felt don’t feel alone.